Eritrea Festival In The US East Coast Conducted With Patriotic Spirit 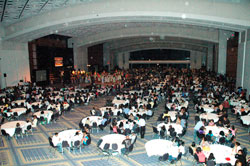 Eritrea Festival in the East Coast of the USA was conducted in Washington D.C. from August 6 to 8 with patriotic zeal.

Asmara, 10 August 2010 – Eritrea Festival in the East Coast of the USA was conducted in Washington D.C. from August 6 to 8 with patriotic zeal.

In the opening ceremony in which Eritrean citizens from various US cities and invited guests participated, the high-level  Eritrean government delegation, Dr. Woldai Futur, opened the historical and artistic exhibitions staged to add color to the festival.

Also speaking on the occasion, the Eritrean Ambassador to the US, Mr. Girmai Gebremariam, pointed out that the 36th Eritrea Festival being held at a time when sanctions and external hostilities are mounting is part and parcel of the integrated national resolute rebuff aimed at foiling the vicious and unjust sanctions resolution. In this regard, he commended the patriotic sentiments expressed by the nationals in all aspect.

Likewise, Dr. Woldai conducted a seminar on the objective situation in the Homeland and the region, during which he highlighted the nation’s achievements in political, social and economic domains, in addition to the modest role its is playing in regional issues. He further noted that impressive achievements have been scored in the development drive on the basis of self-reliance principle through the coordinated endeavors of the people and EDF members. In this respect, Dr. Woldai called on Eritrean citizens residing abroad to reinforce national unity and enhance contribution to the national development drive.

Various programs featured in the course of the festival, including an exhibition highlighting the available investment opportunities in Eritrea,  research studies and lectures focusing on the history of  Eritrean arts in general and the development of music in particular, as well as outline of historical events.

Moreover, a photographic exhibition under the title “Journey of Steadfastness for Liberation from Shabait to Satellite” that also highlights the history of the movement of mass organizations (Hafash Wudubat) abroad prepared by the Ministry of Information not only won broad acclaim on the part of festival participants but also added color to the event.

At the closing ceremony, prizes were awarded to the teams that demonstrated excellence in various sports competitions, while Ms. Meron Fisehaye from Charlotte city won scholarship for demonstrating outstanding performance in the academic and athletics activities.

Art That Advances The Interest Of The People And The Nation