History of Football Sport in Eritrea at a Glance ( PART I) 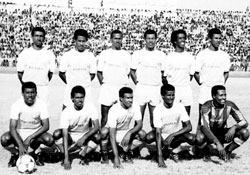 Documents attest that football sport was introduced in Eritrea by the Italian colonialists in early  1930s. At the beginning almost all the players were Italian nationals. It was from 1936 onwards that some indigenous teams began to emerge.

The memory of football sport in those times has become a very distant memory and has remained only in documents that to day no one is heard speaking about it. May be there are some elderly people who talk about it relating with the Italian colonialism and the segregation policy that was imposed on the indigenous people. The same is true with theaters and other artistic performances where audiences were forced to watch from separate sits. How many people know that Cinema Asmara has two entrances, the main entrance reserved only for the Italians and the indigenous people were allowed to enter through a separate entrance from the left side of the hall? The separate entrances were meant that the indigenous people would not mix up with the Italians.
The ‘golden’ era of football sport in Eritrea that today’s “old generation” speaks about was that of 60s and 70s. Football sport during those times had reached into a high level both in terms of quality and popularity. The household names during those times were football players like Ghilay, Wedi Kitchin, Ahmed Abdella, Pache, Ismael, Kifl om Araya, Jemil Hassen, Itallo Vasalo, Luciano Vasalo and many others. The outstanding teams every one eager to watch were Hamasien, Akeleguzay, Tele.
These teams were the most feared ones during the Ethiopian Super League completions where eight teams, three from Eritrea, three from Shewa and two from Harer used to compete for the Ethiopian championship. The competition had some sense of politics involved in it and whenever one of the Eritrean teams happen to come and play in the Addis Ababa stadium no Eritrean stays at home.
In 1963 when Ethiopia won the third African Nations Football competition, for Eritrea was under the illegal rule of Ethiopia, seven to eight players of the Ethiopian national team were Eritreans. Many Eritreans proudly claim until today that the Third African Football trophy belongs to them. The claim has truth ingredients in it because if the majority of the national team members were Eritrean, it was only the unfortunate colonialism situation that was on the side of the name Ethiopia; other wise had it been the other way the cup would have been snatched in Asmara, in the state of Eritrea. During the tenth African Nations Football competitions still the majority of the players (eight of them) were Eritreans. Players like Kiflom Araya who was abroad for higher education had to be recalled to participate in the competitions. That team had every potential of football and it was because of a minor mistake that it was eliminated. The shining stars during that competition were players like Itallo Vasalo, Wedi kitchin, Kiflom Araya, three of them playing in different positions; attaching with beautiful talent in scoring goals, midfielder providing excellent finished balls to the attackers and iron fist in defense position.
When we say those times were “golden” era of football in Eritrea it was not without challenges and bad memories. The very name of the teams was used as a fertile ground for the Ethiopian colonialists to prompt internal conflicts among Eritreans. The situation in 1974 is a case in point to mention. Ambasoira, playing in Addis Ababa against its arch rival Saint George of Shewa, had only to win to snatch the cup. Hamasien, playing in Asmara against Electric of Shewa, had to win by a margin of six goals to win the cup. What happen was, Ambasoira won two to one and Hamasien, God knows how, scored six goals in the second half. This incident was happy end for the Ethiopian colonialist regime, the fans of the two teams, had to confront each other even through violence. The much anticipated outcome, however, was reversed by the Eritrean Liberation fighters. Fliers were put in

every corner and walls of the Asmara city awaking the people on the ill motives of the enemy and advising players never to take part in such football completions again. Understanding of the consequences of the situation majority of the renowned football players of the time fl ed the country either to join the liberation fighters or to live elsewhere abroad. And that was the time where the “golden” era of football in Eritrea fell apart.
After the Dergue regime came to power the intimidation and harassment had reached to its peak. Every Sunday Asmara stadium was a battle ground among the local teams and teams representing the Ethiopian army and police. And yet outstanding teams like the Red Sea and Cipolini were emerging out of the intense situation. Again there were household players like Tesfamichael Dagnew, Hadish Abera (koreri), Tefera Ghebrekrstos, Amanuel Iyasu, Negash Teklit, Yohannes Zemichael, and others. These players like their country men in the 60s and 70s were the back bone of the Ethiopian national team. When Ethiopia took the cup of East and Central Africa competition in 1987 the role of Negash Teklit and Amanuel Iyasu was so great that the Ethiopian fans that were in the stadium during the  game still admire and remember the contribution of the two players. They were even heard saying “Negash the lion”, “Amanuel the lion” in appreciation of their contribution.
The Eritrean teams at the time, despite all the harassments and mistreatment they were receiving, were so competitive that the Cipolini football club was able to win the Ethiopian championship trophy three times consecutively. The cup is still displayed at the Hintza Club in Asmara. The Red Sea Club was also one of the most feared clubs.     The Red Sea Football Club at one time, especially in later years, was considered by many Ethiopians residing in Asmara, especially by the army members, as a club representing Shaebia. Some times, some Ethiopian soldiers were seen waving the Ethiopian flag in the stadium while the Red Sea Club was playing against the army club, Walia, demonstrating that their club is playing against that of Shaebia.
At times the members of the Red Sea Club were forced to spend some nights in the police station for security reasons. Whenever one of the army teams looses the game it was likely that the members and players of the Red Sea Club would be harassed and bitten as if they were responsible for their defeat. Some of the players were also seen taking refuge in relatives homes a day or two before a crucial game against the army clubs to avoid imprisonment. This was a brief history of football sport in Eritrea during the colonial rule. It is a history so vast that needs some critical research, documentation and print so that the existing and the coming generation of Eritrean footballers know what was going on, learn from it and exploit the peaceful situation in independent Eritrea and revive the glorious past football history of the country.
Share FacebookTwitterGoogle+ReddItWhatsAppPinterestEmail

Art That Advances The Interest Of The People And The Nation