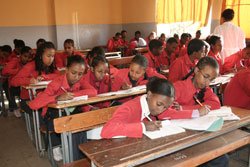 Female genital mutilation (FGM) is one of the terrifying experiences that girls are facing, especially in the remote parts of the world. It is through education and reformed social beliefs that such retrogressive practices can be eliminated from its roots. Apart from this, the girl child of today and the woman of tomorrow play a crucial role in safeguarding the health of her children and should free her-self from any superstitious practices that affect the lives of her children. The educated mother at home is the teacher and mentor of her children. Being internally convinced by the advantage of education, the mother pushes her children to go ahead with the pursuance of education. She can check their performance in school and can guide them through any kind of problem that the children are facing. And above all, she is a role model to her female children.

The fight for the rights of women can be successful and fruitful, if women are equipped with the knowledge and know how of how to overcome the problems. Education will also heighten their struggle after all as Francis Bacon said, “knowledge is power.”

Education will liberate the girl child from all the prejudices and gives her also economic independence. Upon employment, her source of income augments the livelihood of the family she establishes. Therefore, her means of income makes a difference in her life.

Though it has been unequivocally stipulated in the Universal Declaration of Human Rights and other instruments that the education of the child regardless of sex, is a right which all children should equally enjoy, and which every signatory State Party has to implement, the reality on the ground is quite different. This, especially in under-developed continents like Africa, is compounded by some deep-seated traditional fetters of cultural values and by age-old beliefs that are more accentuated in every day life. Though the reality may relatively differ from one continent to another, the Western world which professes the rights of women has been translated into action in letter and spirit and may relatively have a better picture on the surface but in reality still much is left undone. On the contrary, there are many countries, particularly in Africa, which only pay lip service to the workable international tools. Indeed, there could be hosts of problems that militates the implementation of such agreements; and there might also be the lack of parental/societal awareness; absence of governmental commitment; dearth of national resources; lack of facilities; prevalence of retrogressive beliefs and cultural fetters; lack of role models; and other shortcomings.

The above stated principles of the Policy encourage citizens to enjoy the right they have to pursue education. As a result, one can see that the enrolment rate of girls especially in the lower grades and in urban areas is almost as equal as the enrolment of the male children, though there is a different in the enrollment rate gender wise in the remote areas.

Despite suitable national policy, the participation of girls in the rural areas is still low and the reasons may vary from prejudices and cultural beliefs to the lesser role of the mother in decision making, preference of sending a boy to school which is also believed to be more beneficial. Sad to say, some traditional societies even equate the idea of sending one’s girl child to school to watering a neighbor’s garden. Many of the families believe educating the boy child is more profitable  and this is merely due to that after all the girl  will benefit the future family that she establishes outside her father’s house.

It is universally quite apparent that the number and academic results of the girls at lower grades (at elementary level) is by far much better than the later years of their education. At lower age, the girls attend classes with undivided hearts and minds and as a result they share promising ranks in class. However, this reality seems to fade away, during junior, secondary schools and higher education levels. The following finding can be a better illustration to the situation:

On the Eritrean context, much is expected from girls at home as well as elsewhere. Their participation in the classroom and with members of their respective family brings them closer to their present fate and plight. As things stand now, one can enumerate the following reasons as the main ones that militate the girl child’s opportunity to pursue education like her male counterpart:

Prevalence of retrogressive practices and other fetters due to age-long beliefs and prejudices, the girl child is not encouraged to go to school. In the eyes of the society and the family as well, the girl child is seen as less valuable than the male child. This is even more accentuated by the difference that one can see during delivery and time of baptism. When a male baby is born, women ululate seven times whereas only three times to the other sex; and the male baby is baptized after 40 days whereas the female baby is baptized after 80 days (according to the Orthodox religion).

The girl child feels more sympathetic and compulsive to assist her helpless mother in domestic chores and such moral enforcement and sympathy towards the mother results in more absenteeism and ill performance of the girl child at school. For instance, collecting fire-wood, fetching water from a long distance and grinding mills are some of the unavoidable tasks of the girl, especially in the rural areas.

Location and distance of schools is also another deterring factor for the flow of girls to schools. This is very difficult, especially amongst schools that function on shift systems where the girl child is expected to attend classes in the afternoon. Because of this, the girl child will not be allowed nor encouraged to travel long distances which leaves to the only alternative, to stay at home.

Early marriage and cultural belief are other problems that the girl child has to challenge right from birth. The parents of the girl child are always in constant worry and fear that their daughter will end up at the wrong track of life and if that happens, the family soon experiences a huge ordeal where the girl remains to be the figure of embarrassment.

Lack of Sex education is also another problem for girls to continue their education. It is incumbent upon mothers and concerned school teachers to orient teenage girls all about sex. A single mistake may cause many girls to stop going to school due to unwanted and unexpected pregnancy.

Absence of role model is also a problem that the girl child faces both at home and at school. In countries where there is high rate of illiteracy and where the issue of gender is a moot question, it is very improbable to see the mother of the family to act as a role model to her daughters for she herself is the victim of social prejudices and cultural beliefs. As a victim of inequality, she is docile and leads a passive life. What she tells them is a hard-luck story and the facts and experiences that she know very well. However: educated women in general and the teachers in particular have to set the pace for the female children at home, school or in the social milieu more appealing.

Despite the above mentioned facts, the women critics and international organizations focus on this issue and claim that it is a truism that some governments have taken their own initiatives. The issue of girls’ education has universal importance in the world of globalization. As a result, it has become part of the Millennium Development Goal as well as Education for All (EFA). Therefore, the cause of girls’ education should not be left exclusively to be the responsibility of respective governments. It calls for all concerted parties by pulling resources together. The following are some of the plausible recommendations to make the education of the girl child possible:

• Raising continuous awareness among the public especially about the importance and equal opportunity of girls in education.

• Deferment of early marriage to a later period until the girl child reaches an age of adolescences.

• Provision of gender awareness and sex education to enable girls develops self-knowledge and what awaits them.

• Provision of incentive to outstanding girls in schools so that they can be more encouraged for further education.

• Assisting poverty stricken girls and those who perform less in order to enable them to continue their schooling, by implementing different mechanisms.

• Establishing exclusive study centers (consisting ample text books and other supplementary reading materials) for girls, to be guided and managed by trained and academically better peers who can serve as tutors.

• Establishing girls’ hostels in remote areas where they can be insured to continue their education.

• Setting female role models in schools and if possible at home and even in society upon professional training or orientation.

• Holding periodical discussions and meetings among peers to discuss problems that happen frequently and affect their academic life negatively.

Eritreans in the Diasporas; Exemplary and Model Communities for Others