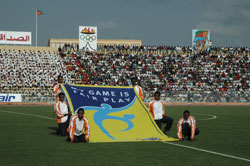 In an article they wrote accompanied by photos, the media outlets highly appraised the artistic performance staged by Eritrean artists in the opening ceremony which amply demonstrate the existing potentials and competence in the country. The different media outlets also expressed deep impression with the utmost preparations made as regards hotel, food stuff and health facilities.

Coach Mohammed Abdulle Farayere was quoted by the website as saying: “I have participated in many CAF and CECAFA tournaments and to my surprise I have never seen such high quality health facilities before. I congratulate Eritrea on the good beginning it has made.”

Likewise, the Tanzanian-based Daily News expressed admiration to the opening ceremony conducted in a colorful manner.

The General Secretary of CECAFA, Mr. Nicholas Musonye told Daily News that he praised Eritrea for its great responsibility and the good organization for the regional soccer tournament.

He said: “It is not something easy to assemble nine teams from different countries at one place, and on behalf of CECAFA President and the Executive committee, we are very grateful to the Eritrean government, football federation and the Eritrean people for embracing this huge responsibility.”

National soccer teams of Eritrea, Tanzania, Sudan, Kenya, Somalia, Uganda, Rwanda and Zanzibar, as well as  an invited team from Yemen are participating in the 5th CECAFA Cup under 20 here in Asmara that would continue until August 28.