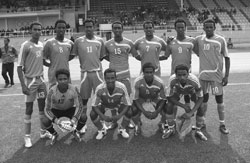 Right after independence, in 1991, the Eritrean government took strong initiatives to rehabilitate all sports activities in general and football sport in particular. And beginning from this time we could talk about the Eritrean football for we are responsible for its development and revival. In 1992 the Eritrean government issued sports policy and strategy targeted towards community by forming different independent federations in all levels; national and regional.

The Eritrean National Football Federation included six committees: Finance, Competitions, Referees, Technical, Women and Public Relations. There is also a medical team. All members of the executive committee are elected from qualified and experienced sports citizens. The ENFF has nine Executive Committee members, six members representing each region of the country, and twenty selected members working as sub-committees in the above mentioned disciplines. Football tournaments are organized both at regional and national levels. For senior categories above 20, the six regions hold annual championships for 1st, 2nd and 3rd divisions. Regional championships then take part in the national club championship organized by ENFF. The winners in this competition then participate, representing the country, in CAF-C1 annual tournament. In addition to this, each region also organizes yearly knockout tournament among its regional teams. The winners in these regional tournaments then take part in ENFF organized national clubs knockout tournament; The winner in this national competition participates, representing the country, in a CECAFA competitions.

For juniors, under 20 and 17, regional selections engage in an annual ENFF organized tournament, at national level. From this tournament selection of players is conducted aimed at establishing national teams of both groups, under 20 and 17, which take part in regional and international tournaments organized for this purpose by CAF, CECAFA and FIFA. The Eritrean national team that will take part in the CECAFA competition that kicked off on Saturday August 14, 2010, in Asmara under the theme “Development and Friendship Cup” is selected through this process.  The CECAFA Football Competition under 20 is organized for the first time in Eritrea. The competition that will remain open till 28 of August is expected to be a good opportunity for the participating teams and countries to see and observe by themselves the peace and tranquility that prevails in Eritrea. We Eritreans claim ourselves that our country is peace loving, crime free, and with very hospitable people. During the coming two weeks the participants and the other guests will witness this.

Eritrea has been an independent and sovereign country in 1991; and only 20 years have passed since we gained our independence. Within these twenty years tremendous development activities in terms of infrastructure; including roads, housing complexes, port facilities, airports, mechanized farms have been conducted. Our development strategy is based on self-reliance. Self-reliance means depending on one-self in terms of man power, resources and other basic necessities in our endeavors of development. Partnership with regional and international players has also a big part in our strategy of development; partnership on equal footing.

The CECAFA football tournament is being conducted under the theme “Development and Friendship Cup”, which is what Eritrea aspires to prevail in this region. Eritrea believes if the countries in our region could work together for economic development, peace and friendship, the region is rich in resources and that in a very short period of time the people of the region could become self-sufficient. For the people of this region to feed themselves the first priority would be to create peace and foster friendship.

This inevitable pre-requisite could  be realized only if the region is free from outside interferences and depended on internal resources. Eritrea is hence, very committed to this. Our guests, football teams and organizers of the CECAFA tournament have plenty to observe and admire in Eritrea. Eritrea is very small in terms of geography and population. It has nine nationalities and two religions, Islam and Christianity, living in harmony and peace for centuries.

Each nationality has its own cultural and traditional practices and each one respects the cultures and traditions of the others. The thirty years of armed struggle for independence which culminated in 1991 with the victory of the Eritrean Revolution was conducted with full participation and united forces of all the nine nationalities.

The violence based on ethnicity and religion we observe in most countries has no place in Eritrea. The hospitability of the Eritrean people is also another strong asset that we are proud of. The people are very welcoming and friendly to all visitors.

It is our sincere hope that the participants of the CECAFA Cup, the leaders of the teams and visitors will enjoy the peace that is prevailing in the country and the hospitability of the people. Good beginning of the CECAFA “Development and Friendship Cup” Eritrea 2010.