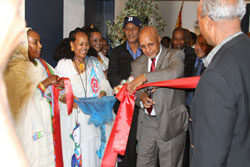 Eritrea Festival in the western coast of USA was conducted from August 13 to 15 in Oakland city, California, with patriotic zeal.

Asmara, 18 August 2010 – Eritrea Festival in the western coast of USA was conducted from August 13 to 15 in Oakland city, California, with patriotic zeal.

The Eritrean high-level delegation, Dr. Woldai Futur, opened the festival that featured photographic exhibition prepared by the Ministry of Information under the title “Journey to Liberation” and “From Shabait to Satellite”, as well as paintings staged by youth artists and public pavilions, among others.

In a seminar he conducted to festival participants, Dr. Woldai lauded the impressive role of Eritrean citizens residing abroad in general and those in western USA in particular in strengthening the integrated resolute rebuff towards denouncing the unjust and illegal sanctions resolution against Eritrea. In this connection, he expressed conviction that the nation would emerge victorious through overcoming all challenges thanks to the dedication of its people, the Government and members of the Defense Force.

Noting that the task of achieving food security is being given top priority, Dr. Woldai outlined the achievements registered in various sectors, including education, health, industry and human resource development. In this respect, he stressed the significance of such accomplishments in improving the people’s standard of living. Still, exerting more concerted endeavors is of vital importance in registering gratifying outcome, he elaborated.

Also on the occasion, extensive discussion was conducted on assessing the impact of the resolute rebuff against the sanctions resolution, besides mapping out its future action plan. Moreover, a lecture was given on the development and preservation of music and melody in the country.

Reports indicated that artistic works reflecting the traditional and cultural relics of the Homeland which is staged for the first time in the festival won broad acclaim on the part of the participants.

Individuals who demonstrated excellence in various competitions in the course of the event were also awarded prizes at the closing ceremony, the reports added.