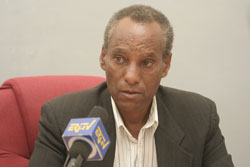 High school students above the age of 15 are engaged in Summer Work Program (SWP) every summer starting from 1994.  The SWP was primarily launched to restore Eritrean forestry, which used to cover most of the land decades ago. Along this, the program also provides an excellent opportunity for participates to develop integration among one another and learn work ethics. So far, various achievements have been accomplished through this program. Shabait conducted an interview with Mr. Fitwi Woldegiorgis, coordinator of the SWP regarding the program and its impact thus far on the participants and the environment.

Let’s start with the background of the Summer Work Program?

The program has been conducted for 14 rounds including this year. It was not a new phenomenon when it was proclaimed in 1994 as it was part of the EPLF’s curriculum system during the armed struggle period.  It is a program targeting the development of Eritrean forestry through the participation of young students. The program is also vital in cultivating these students mentally and physically which in turn enables them to become the backbone for the nation’s developmental drive.

Explain to us the main objectives of the program?

The program was primarily commenced to restore the nation’s forest cover or green land that deteriorated due to prolonged war and successive droughts. Restoring the country’s green land is very important to combat desertification in view of the fact that our region is prone to droughts. On top of this, it is aimed at enhancing students’ awareness regarding preserving ecology through involving them in the development plan of the country at an early age. Besides, creating an environment where these students could know their fellow citizens outside their surrounding and discover their country is also part of the program. Through this, they can develop hard working spirit, gain experience and develop close ties among themselves.

What activities do the students carry out during this SWP?

The main task is focused on reforestation, terracing, soil and water conservation activities, building and renovating roads in rural areas, as well as participating in agricultural activities of farming communities. Furthermore, the work also comprises of sanitation and maintenance of school furniture by technical school students, among others.

How many students have participated in the program so far?

About 300,000 students out of whom 27% are female from grade nine and ten have taken part in the program so far. In addition, 8,000 teachers, 4,000 agricultural experts, 1,500 first aid providers and 1,200 coordinators have been involved in summer work. About 20,000 students have participated this year.

How do you evaluate the work accomplished by these young students until now?

The work accomplished is estimated to be worth more than one hundred forty million Nakfa in the last 14 rounds. The activities include digging about 14 million tree holes, planting 17 million seedlings, construction of terraces and building 300,000 Km-long canals. Places such as Tokor, Serejeka, Senafe and Shiketi could be cited as example of the effective reforestation program. Besides this, the program has also helped to nurture hard working youths.

Tell us the improvements made in the work procedure of SWP during these 14 years?

In 2001, students were assigned to work near their homes and respective regions with exception of students from vocational training centers. This change had minimized the SWP budget by 74%. A research had been conducted at the end of 2008 in which six ministries including National Statistics Office took part to evaluate the 10 years work accomplishment. Based on this, we are trying to implement the recommendations adopted at that time.

What is your future action program?

Our effort is to further strengthen the SWP through promoting high school students involvement at community level to achieve more gratifying outcomes. We are also making efforts to tackle shortage of rainfall, provide enough equipment and train guards to protect the tree seedlings planted.

I would like to call on all government and non-government organizations, ministries as well as the society at large to further strengthen their input in the program so as to realize the desired goal.

The Eritrean Education Sector: Progress And Challenges (Part I)

The Lost Ship of Nezario Sauro