The Eritrean Education Sector: Progress And Challenges (Part I) 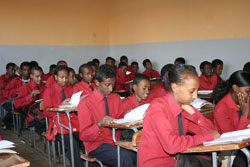 Education is enshrined in the Eritrean national charter not only as a basic human right but also as a cornerstone for economic emancipation. Education is given particular focus for its role in developing human resources as well as improving the public health and general living standard.

To this end the Eritrean government has ever since the dawn of independence made extensive large and small scale investments in this sector that have effected  ground breaking changes in the overall educational system in the country.

In different occasions and policy statements, the Government of Eritrea has underlined that the country’s determinant resources are its human resources and that in addition to being a basic right, education is the primary tool to fight poverty, illness, backwardness and ignorance. The government has also pledged to strive relentlessly so as to enable nationals explore their potentials and develop their skills for the maximum benefit possible. Due emphasis is also given to equalizing the disparity in access to education among different sections of the society.

Although the Eritrean government’s commitment to the education sector emanates from the core principle that it is the right of every citizen, Eritrea is also strives to accomplish international pledges and agreements it singed such as the Education For All, Millennium Development Goals, UN Literacy Decade, Convention On the Rights of the Child, Poverty Reduction ….etc.

Furthermore, the distribution of support system institutions such as libraries and science laboratories, as well as the provision of educational facilities and resources in different corners of the country has shown considerable progress.

Successful results have also been achieved in providing access to education to those who have never had the opportunity to go to school for mental, physical and social constraints and barriers.

2. Quality And Relevance of Education

The system of education that the Provisionary Eritrean Government had inherited following independence was the kind that was tailored to serve the political, cultural and social interests of colonial forces. The EPLF had on the contrary brought along with it a system that reflects the socio-economic and cultural realities of the people and the country which at the same time can lay a strong foundation for building a free and prosperous nation. Hence the Eritrean government was able to replace the colonial educational system with the revolutionary without any transitional gap.

Having been completely altered very soon after independence, the Eritrean educational system and curriculum did not remain static. It was continuously revised and updated to fit and compliment the ongoing nation building process. Accordingly, a nation-wide survey (Situational Analysis and Needs Assessment Survey) was undertaken in 1996 whereupon formative changes were introduced to the curriculum.

In 2002 the Eritrean government drafted a concept paper aimed at an extensive change in the existing educational system. The primary objective of the paper was to create a qualitative and relevant educational system that complements national development plans by cultivating skilled and professional human resources. Based on this paper, the government made an investment of more than 240 million USD and set up the Education Sector Development (ESDP). The ESDP encompasses four important pillars; illiteracy eradication, promoting secondary education, technical and vocational training as well as developing institutional capacity.

The new and revised curriculum has been drafted in a way that it reflects the potential and creativity of students and provides broad, balanced and relevant education. The basic philosophy behind the curriculum is to make the education system a student-centered one. And one of its most important aspects is that it gives some of the responsibility of the teaching-learning process to the students in a bid to encourage their creative and productive instincts.

The new curriculum is also aimed at promoting science, technical, language and communication courses starting from elementary levels while at the same time providing students with a range of profession choices that better suit their talents and potentials.

Preparing and printing text books that put in practice the new curriculum are also an important part of developing the educational system. Hence, an investment of over 158,829,660 Nakfa was made to print relevant text books for elementary, junior and secondary level of schools.

Support systems such as, laboratories, libraries, information technology facilities and other teaching aid and pedagogical facilities make up an important aspect of the over all endeavors to develop the school system. Consequently, ample consideration was given to these very significant aspects of the teaching-learning process and substantial investment was made for their provision. Work has already begun in providing well-equipped science labs to all the secondary schools in the country.

Being in an age of information, the importance of information technology facilities for students cannot be stressed enough. The introduction of the Information and Communications Technology (ICT) has thus far played an important role in easily providing quality education to students.

Starting from 2005, the Ministry of Education has introduced ICT laboratories in most of the secondary and junior level schools in the country. Relevant ICT training has also been provided to teachers and school directors to further promote IT and computer literacy among students. Schools and students in remote parts of the country have not been left out either: computer labs have been installed in schools in remote areas with the help of solar powered energy.