The Lost Ship of Nezario Sauro 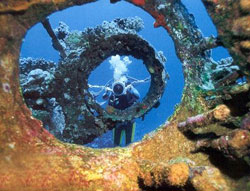 Many of the world’s historic sites have either been discovered or are already known to the world. On the contrary the Eritrean Red Sea is one of the very few places that have yet to be discovered and recognized as historical sites. Red Sea is located in the world’s busiest trade routes around the Atlantic Ocean and its history and possession of various sites make this place unique.

The coastal area around the Eritrean Red Sea is believed to be the place of the beginning of human life. It is also an area of the expansion of various religions, a site for historic remnants of the WWII, the battles of the Eritrean people’s revolution against the Ethiopian rulers, the authentic railway that sprawls across the steep valleys of the eastern escarpments of Eritrea. In general this area was the center of trade, culture and various ancient architectures. The Red Sea is also rich in numerous fish species, water vegetations, corrals and few very amazing sea wrecks.

Nezario Sauro was first built in 1919 in Italy and began sailing in 1924. The ship’s first trip was from Geneva to South Africa but stopped traveling for maintenance purposes later around 1927-34. In the year 1934, the ship was bought by another company which turned it into both passenger and Cargo ship. As a result of this, in the year 1935 the ship began sailing to the ports of Somalia and Eritrea. According to the residents in the area, the port of Massawa was serving as headquarters of the ship. Later the company reduced the seats on the ship and made it more of a cargo ship; this second renewal took another three years. In 1937, the ship transferred to another owner where it turned it into a passenger ship and changed its color from black to white.

Nazerio Sauro was 136 high meters and 16 meters long, and is now submerged in the deep waters of the Red Sea around the Dahlak Islands. The ship could carry 8150 tones of cargo and 1237 people at one time, and has a speed of 15 knots. It had three compartments with 128 rooms and one big ballroom.

On June 10, 1940 around 50 Italian ships including Nazerio Sauero were blocked in the port of Massawa, due to the WWII, and the captains of the ships were trying to sail the ships towards Italy. Later in 1941 the WWII expanded and the ports of Massawa fell in the hands of the British. Many of the Italian ships functioning from the Red Sea ended up in British hands while some remained in the Dahlak Islands.

On April 6, 1941 Nazerio Sauro attempted its final sailing to Italy; unfortunately the ship was caught in the middle of the ending war and sank in the Gulf of Gubet Musnefit between the islands of Dahlak Kbir and Nakura at a depth of 40 meters.

Nazerio Sauro was first discovered in the 1960 by Philip Cosco and a group of divers called Calypso. According to the reports of Philip the ship was not completely under water at that period of time.

Later, the ship was discovered by reporter Andrea Gusty in 1995. And this second findings’ report was broadcasted and published in many media outlets of the world. After the second finding of the ship many Europeans especially Italians began to look for this amazing sea wreck. Once you dive into the waters and reach the wreck, it seems like you are swimming in a city flooded with water. What makes this ship wreck different from others beside the size of the ship are the remnants of the motors and the kitchen equipments of the ship have been left untouched for 75.  The ball room with its staircase and music instruments, the clinic of the ship with its full equipments and the unbroken windows of the ship are the amazing things that one can witness in the deep waters of the Red Sea.

In addition to all this, the ship is surrounded with various sea vegetations and variety of fish and corrals. The Nazario Sauro is indeed one of the world’s yet unexplored historic amazing sites.