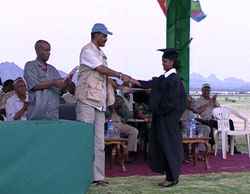 President Isaias Afwerki today presided over the graduation of the 4th batch of the Sawa Vocational Training Center numbering 2,497 in the presence of senior government officials and parents.

Sawa, 21 August 2010 – President Isaias Afwerki today presided over the graduation of the 4th batch of the Sawa Vocational Training Center numbering 2,497 in the presence of senior government officials and parents.

Speaking at the graduation ceremony, the President congratulated the graduates, instructors, caretakers and parents, and urged the graduating batch to further deepen their newly acquired knowledge and skill through practical endeavors, and thereby ensure their bright future.

Noting that the nation’s resource rests on manpower equipped with the necessary knowledge and skill, President Isaias pointed out that efforts exerted within the past 4 years to build human capacity are yielding promising outcome.

The Commander of the Sawa Education and Training Center, Col. Ezra Woldegebreal, on his part noted that unlike in other countries in which educational opportunity is reserved only for the few rich section of the society, in Eritrea such an opportunity is not only equitability provided to all sections of the society but also the implementing agent is the general public in itself, especially the youth. In this respect, he emphasized that the secrete behind Eritrea’s success and progress lies in the task of nurturing dynamic and disciplined youths.

Likewise, the head of the vocational training center, Mr. Fisehaye Kidane, explained that the graduates have been trained in 9 different fields, and that 33% of the prize-wining outstanding students are females.  He further stated that the mechanism introduced in the 2009/2010 academic year to upgrade the quality vocational training is playing major role in promoting the competitiveness of students. Mr. Fisehaye particularly lauded female students competitiveness among the graduating batch.

A representative of the graduates expressed appreciation for the educational opportunity provided them and voiced determination to live up to the nation’s expectations.

Meanwhile, President Isaias opened and observed an exhibition highlighting the competence and creative potentials of students. The President and officials also awarded prizes to students who demonstrated excellence in their academic pursuit, as well as exemplary teachers and caretakers.

Artistic shows reflecting the significance of education and training were presented on the occasion.

This year’s graduating batch of which 40% are females completed an 8-month long course in Bussiness, Management, Construction Technnology, Modern Construction and Agricultural Machineries.

Agordat sub-zone: Parents encouraged to send their children to school