Post-graduate study opportunity to be provided in an expanded manner 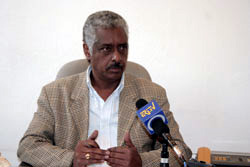 Asmara, 23 August 2010 – Post-graduate studies would be launched in an expanded manner in the next academic year in the nation’s colleges that finalized the necessary preparations and through sending citizens abroad, according to the national board of the Eritrean institutions of higher education.

The Executive Director of the Board, Dr. Tadesse Mehari, indicated that the Government has been extending the necessary support to the newly opened 7 colleges in the country in a bid to upgrade their competence in the provision of the First Degree program.  He explained that the colleges are now ready to offer post-graduate programs in diverse areas of study and added that staff members of the colleges currently working as graduate assistants would be soon sent to various countries of Asia, Europe and others to pursue Masters course.

Dr. Tadesse further pointed out that the Masters program by sending nationals abroad would be undertaken in  two forms involving full government expense’s that would begin in the coming year on the one hand, and that of scholarship in which the Government would cover partial expense on the other.

Moreover, he stated that there are plans to offer post-graduate educational opportunities to nationals working in ministries and other government institutions through sending them abroad or distance learning, and that the opportunity would be provided shortly after the necessary preparations are finalized.

Dr. Tadesse went on to say that following the finalization of post-graduate programs, doctorate study programs would be launched through sending limited number of individuals abroad. As a result, in the coming 5 to 6 years, teaching-learning process would be fully undertaken by nationals, which in turn would give rise to big success.