Concerted Action to be Taken to Combat Deforestation in Southern Region 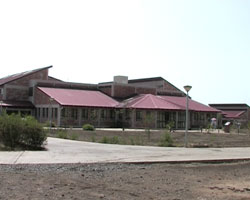 Share
Mendefera, 25 August 2010 – A meeting held yesterday in Mendefera town highlighted the need for exerting coordinated endeavors on the part of all government institutions in raising public awareness  in introducing renewable energy, as it has vital role to play in preventing deforestation.

In the meeting in which the ministers of land, water and environment, as well as agriculture and justice took part, briefings were given regarding the condition of forests and the alarming irresponsible cutting down of trees in the Southern region.

Following the reports presented at the meeting, the ministers underscored that raising the awareness of the public as regards the significance of vegetation and providing alternative resources are quite imperative in tackling deforestation.

The Minister of Justice, Ms. Fawzia Hashim, pointed out that there are plans to translate the adopted laws pertaining forests and wildlife into practice without delay, and that such cases would be examined in magistrate courts. She further stated that the implementation of the law would bring about basic solution to the problem.

The Minister of Land, Water and Environment, Mr. Tesfai Gebreslasie, said on his part that concerted action is being taken to expand the introduction of renewable energy, which would in turn prevent the cutting down of trees for firewood.

Likewise, the Minister of Agriculture, Mr. Arefaine Berhe, noted the need for strengthening the forest and wildlife control unit, besides shouldering the authority of taking measures to punish those involved in illegal practices in this domain. Noting that the introduction of smokeless ovens in an expanded manner could bring about temporary solution, he emphasized that the plans to view the cases pertaining to forests and wildlife in magistrate courts should be put into effect immediately.

Also in an opening speech, the Administrator of the Southern region, Mr. Mustafa Nurhusein, state that the cutting down of trees is an irresponsible act that goes beyond any reason.

Reports indicated that about 284,000 big and medium trees in the region were destroyed this year alone.