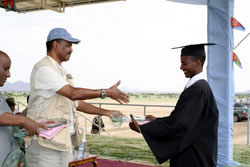 Just one month after Sawa hosted the 3rd Eritrean Youth Festival, it witnessed the commemoration of another round of vocational trainees. On 21st of August 2010, 2497 trainees graduated after they participated in a vocational training that went for about 8 months and dealt with various theoretical and technical courses. The graduation ceremony was attended by His Excellency the President Isaias Afwerki, Ministers, dignitaries and invited guests, as well the families of the graduates.

As it is known, the Centre for Vocational Training has been founded with an intention to provide various types of vocational training in 19 fields of study. The school, which is housed in different five educational centers each year, accommodates 2500 new students.

Since its founding back in 2006, the Sawa Centre of Vocational Training has been registering steady progress in terms of the quality of the training it can provide as well as the number of students it can accommodate each year. Its acceptability has been steadily increasing ever since it’s foundation.

The school has been opened to provide an opportunity for matriculation exam by providing them with vocational training that could enable them to join the workforce. Hence, the centre has been fulfilling the demand of basic required skills of vocations and has been providing them another opportunity to equip themselves with vocational skills highlighting their potential and setting them in the right course of becoming self-reliant.

In the graduation ceremony President Isaias, the Sawa Centre for Vocational Training graduated its 4th batch numbering 2,497 in the presence of senior government officials and parents.

Speaking at the graduation ceremony, President Isaias congratulated the graduates, instructors, caretakers and parents, and urged the graduating batch to further deepen their newly acquired knowledge and skill through practical endeavors, and thereby ensure their bright future.

“For every journey there is a step and today’s ceremony is the first step of their long journey. The trainings that you have received both during the eight months and previous months are even part of the step not even one step of the whole journey.”
President Isaias reminded the graduates.

President Isaias went on to emphasize in his speech and said “you have only received the initial stage of the vocational training not the whole required level. I remind that you have gained the basic knowledge in order to further acquired skill in your future life and career”. He underscored that there is work to be done to develop the centre since it is in its early stages in terms of its infrastructure and facilities. So, he emphasized the significance of all relevant bodies to exert all effort in developing the Centre.Noting that the nation’s resource rests on manpower equipped with the necessary knowledge and skill, President Isaias pointed out that efforts exerted within the past 4 years to build human capacity are yielding promising outcome.

The Commander of the Sawa Education and Training Centre, Col. Ezra Woldegebreal, on his part noted that unlike in other countries in which educational opportunity is reserved only for the few rich section of the society, in Eritrea such an opportunity is not only equitability provided to all sections of the society but also the implementing agent is the general public in itself, especially the youth. In this respect, he emphasized that the secrets behind Eritrea’s success and progress lies in the task of nurturing dynamic and disciplined youths.

Col. Ezra Woldegebreal in his speech congratulated the graduates and emphasized that the training centre benefits all the members of the masses equally regardless of their social backgrounds. In addition, this Centre provides life-skill lessons and practical trainings.

Col. Ezra concluded his speech by once again congratulating the graduates and wishing them, good luck in all their future endeavors.

Taking the venue next, the Head of the Vocational Training Centre, Mr. Fisehaye Kidane, explained that the centre provides vocational trainings in different fields such as construction technology, modern machinery, farming technology machinery, drafting, electricity, plumbing, agriculture, commerce, management and etc. He further went on to outline that the current batch has been trained in these different vocations, and that 33% of the prize-winning outstanding students are females. He further stated that the mechanism introduced in the 2009/2010 academic year to upgrade the quality vocational training is playing major role in promoting the competitiveness of students. Mr. Fisehaye particularly lauded female student’s competitiveness among the graduating batch.

In his speech, Mr. Fisehaye disclosed that during the previous academic year, 754 students have scored between 3-3.99 cumulative points and 24 have scored full point, most of which have been registered by female students. A representative of the graduates expressed appreciation for the educational opportunity provided to them and voiced determination to live up to the nation’s expectations.

Concerted Action to be Taken to Combat Deforestation in Southern Region

CECAFA’s ‘Development and Friendship’: The Youth, Still The Reason To Come Together