Encouraging Result and a Big Lesson to Learn 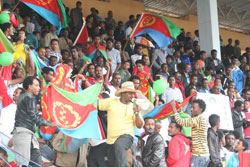 The Eritrean National Team under 20 won a silver medal at the CECAFA “Development and Friendship Cup” organized and sponsored by Eritrea. The tournament took place from 14 to 28 of August where National Teams under 20 from Eritrea, Tanzania, Sudan, Kenya, Somalia, Uganda, Rwanda and Zanzibar, as well as the invited Yemeni team took part. The 5th CECAFA Cup under 20 tournament concluded on the 28th of August 2010 with Uganda National Team winning the trophy. In the final matches the Eritrean and Ugandan national teams drew 1-1 in both the regular and additional time. In the subsequent penalty kicks, the Ugandan team beat the Eritrean team 5-3, thus emerging as the champion.

Also in the matches conducted earlier between the Kenyan and Rwandan national teams for ranking, the Kenyan team defeated its counterpart 1-0 and assumed the 3rd position. The three teams were awarded prices in accordance to their ranks. Hence the National Team of Uganda received 8,000 Dollars while the Eritrean and Kenyan National Teams received 6,000 and 3,000 respectively. The organizing country, Eritrea, was highly praised by all members of the national teams and by the CECAFA executives. According to them it was for the fi rst time the CECAFA tournament, which is one of the oldest organizations in African football history, was given high regard by the Eritrean people and government. The opening ceremony was a splendid one that every single Eritrean was proud of. The guests, both the leaders of CECAFA and the participating teams had no expectation of that kind of opening ceremony and they were taken by surprise. According to all the participants the show staged at the opening ceremony by Eritrean artists was quite amazing that fully attests to the theme of the tournament “Development and Friendship” and Eritrea’s vision. Regarding the tournament Mr. Leodegar Tenga, President of CECAFA said “This tournament will not only stimulate the development of football in this region, but it will also renovate social, economic development of our people and foster friendship”. The Secretary of CECAFA, Mr. Nicolas Musonge, on his part said that he would indicate to the Federation of African Football that Eritrea can indeed host African Cup games without any difficulty. He went on to commend the generous hospitality of the people of Eritrea. Moreover, those participants which were their fi rst time in Eritrea had the chance to witness and enjoy the peace and tranquility of the country. They realized that during their stay in Eritrea they felt at home and part and parcel of the Eritrean people, and they promised upon their return home they will tell their country men what they saw and encountered in Eritrea. Members of the participating teams and leaders of CECAFA had also the chance of visiting Massawa and some parts of the Southern Region. The zig-zag road connecting Asmara-Massawa through Filfi l-Solomuna which is hundred percent made by Eritrea and its promising construction companies was one of the wonders the visitors might have enjoyed. Massawa that was almost turned into rubbles by the Ethiopian occupation forces in 1990 is now one of the attractive cities. The agricultural activities in the Southern Region are also worth visiting. The tour participants expressing their satisfaction with the warm hospitality accorded to them during their tour said that they witnessed Eritrea’s commitment to promote peace and common development. Furthermore, commenting on the development activities taking place in the areas they visited they acknowledged that Eritrea would be the symbol of Africa in due course as it is blessed with peace and stability, coupled with rich natural resources.

The 5th CECAFA tournament was very important for us Eritreans too. The fact that the CECAFA Cup was hosted by Eritrea is a tribute to the prowess and potential of the  entire East Africa countries and the rest of the continent with an opportunity to harness the power of the international event to project Africa’s potential. It was also unique Encouraging Result and a Big Lesson to Learn occasion to transform the Eritrean people’s pride and enthusiasm into positive dynamic of solidarity,tolerance and development. That is exactly what happened during the two weeks tournament. The Eritrean people elegantly proved that they are friendly and hospitable people. The Eritrean government has also proved and demonstrated its effi ciency in organizing such events and the commitment it has toward peace and friendship in the region. During the weeks of the tournament no security bridge was encountered and heard and that was a big signal to our guests on how much peace loving, honest, and committed the Eritrean people are.

The performance of the Red Sea boys on the pitch was also highly commended. They have done their level best to make the people of Eritrea very proud of them. Every one who watched the games the Eritrean boys played during the tournament was convinced that had the team stayed together for five years like that of the Ugandan team they would have defi nitely out smarted all the teams by far more performance and goals and snatch the cup. The performance of our team was excellent vis-à-vis their stay together for two months. It was because they played well and were able to stand second only to lose the game through a penalty kick-out. And penalty kick-outs are a matter of chance rather than performance of a whole team. Proof to this case in point is that we have seen best footballers of the world miss targets and end their national teams in the loser table. It was recognizing to what they have done on the pitch and the end result they scored that President Isaias Afwerki commended and encouraged the Eritrean national soccer team, winner of the silver medal in the 5th Central and East Africa CECAFA- Under 20 Cup for demonstrating an excellent performance and awarded each player as well as the coaches 50,000 Nakfa as encouragement and called on them to work hard for more gratifying outcome.

The support the Eritrean people gave to their team was beyond expression and extraordinary. One could not imagine peopleroaring “Red Sea, Red Sea” from 11 AM to 6 PM, straight for seven hours. The CECAFA tournament was also an occasion where we witnessed the deep nationalism of the people of Eritrea. Many people throughout the world hardly know their national anthem by heart and sing. And it was heartbreaking to hear tens of thousands of Eritrean spectators roar in the stadium singing their National anthem. Another big lesson that we could draw from the tournament is that the Eritrean people are football lovers. No one needs extra explanation that with good performance of players the fans are there supporting their team to the last second. Hence, all concerned institutions and individuals should work hard in developing sports in our country that has begun to show steady progress. The players have also observed on how much the people of Eritrea love the sport. It would be, therefore, up to them to work hard and allow the spectators come to the stadium every Saturdays and Sundays to enjoy the fruits of our players. As we have seen during the CECAFA tournament no single individual was interested on the Premier League; every one was talking at entertainment places, at home and elsewhere on the performance of our young players and the prospect they had to win the trophy. So far they have done well and we would only say keep it up and work to the expectation of the sports loving people of Eritrea.

September: A Month of Prolific Victories and Prideful Tiaras