September: A Month of Prolific Victories and Prideful Tiaras 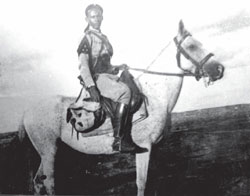 Assuredly, the 10,860 sleepless days and nights during the revolutionary struggle for Eritrean independence are not easily decipherable. The determination of the people which was aimed at depriving fetters of the shyster imperialists and their masters, unity of the differently nurtured but well integrated seekers of judicious freedom, restless scenarios of confrontations between invaders and the Eritrean people are, indisputably, eternally memorable.

Meanwhile, during the critical stage for Eritreans to level their anti-colonial determination, if possibly to lure the people of this land of holly pledges, the trusted minion to the west, Imperial Hailesselassie visited Eritrea on 4 October 1952. During this futile visit, he pledged that he would respect inescapable demand of the Eritrea people unequivocally. But, as that time, for Ethiopia and its mentors, it was not only for granted efforts to put their restless endeavors to undermine national the indivisible sovereignty of September: A Month of Prolific Victories and Prideful Tiaras Eritrea; undoubtedly, but also to ascertain their existence and to please his masters, Hailesselassie was rushing fi ercely to bake conspiratorial loaves to annex Eritrea. And as historical documents vouch unfl inchingly, putting aside the irrefutable demand of Eritreans for independence and national freedom, he declared that “Eritrea is inseparable part of Ethiopia”, and soon, after one decade almost, he cancelled the federation status on 14 October of 1962 offi cially. Over this, what a heartstabbing truth was that the United Nation, a mere organization of mere rhetoric’s’ from where double standard of manifestation policies have been duplicating, kept dump on the course of this inexcusable and unjustifi able political maneuver. Paradox to the objectives and principles of its founding principles, this organization, the United Nations, emboldened for the miscalculated political step aimed at expanding its sphere of infl uence denied Eritrea its rightful place and supported the wrong move of the invaders. Even before fi ve years of the official cancellation of the federation by the trusted ally’s offi ce in Addis Ababa, Eritrean students were holding peaceful demonstrations, and less often, politically motivated strikes against the despotic leadership of this puppet and black imperial were conducted in the months of March to June of 1957. Those historically well honored youngsters from Kehas Secondary school (now Keih Bahri Senior Secondary School) who subsequently followed by students from San Giorgio (Mendefera), Hibret (Debre Sala elementary school), Islamia of Akria, Asmara Technical School and Keren, enkindled the torch of historical awarness about the conspiratorial packages the imperial and other few mercenaries were conspiring to annex Eritrea.

Unfortunately, even in 1962 students and nationals did similar demonstrations from University of Asmara, however, as the representative of the shameful imperialist offi ce in Asmara had been engaging in putting destructive crackdown actions over every Eritrean who triggered to, and participated in, peaceful and undeniable demonstrations, instead of resolving the question pacifi cally, resorted to assassinating infl uential nationals, jailing innocents and putting them under high surveillance of police and security forces, and forcing people to move to Ethiopia in the form of exile, a state much renowned symbol of intermittentstarvation and drought. Though with the brutal action they took the demonstrations and strikes seemed to cool down, however, the truth was vise versa. More than any other time, political awarness of the people was becoming high, and triumphantly, was hardening the indomitable rock of determination and struggle against any invader, be it black or white, rich and poor. Especially at that time where economical abhorrence was engulfi ng majority of our people in its gloom impact, Ethiopia, which is now ranked second from the bottom in the developmental index of the United Nations after Niger, was blooming as shining star underpinned by the ransacked properties from Eritrea.

Factories and industries that were commensurable to the status of developed states from Africa had been uprooted from Eritrea, and erected in different parts of Ethiopia. Until to date there is no data in which historians could agree how much property the emperor looted from Eritrea, however, the amount of damage which Eritrea had been suffering from the inexcusable aberration of this next door state was, of course, highly valued. Meanwhile, at that time, in Eritrea the swing of economic development started regressing at staggering rate; unemployment rate was sky rocketing, families started to realize their future fate was becoming very gloom, students and professionals started feeling that there is no light at the end of the tunnel with no foreseeable future. Then what to do?

The first bullet for cutting the fetter of invasion was fi red on September 1, 1961 by Idris Awate with his six colleagues from Adal. They had six old guns but they did have the courage and commitment. Through time many more people joined the armed struggle. When the few freedom fi ghters started the journey for independence, they knew the hard, twisted and long way. They knew freedom is not for free.

As expected, the journey of the armed struggle was no smooth. There were many ups and downs. It was after 1970s that many youth joined the armed struggle and the struggle was shaped in a new and correct way. During the first years of the 70s, the Eritrean Peoples Liberation Front (EPLF) developed a reputation at home and abroad as highly disciplined political movement, whose members consistently articulated its outlook, promoted its programs and modeled its values. And after thirty years of bloodiest war and massivemilitary operations, the fi rst bullet that was fi red by Idris Awate and his colleagues brought another national pride; a new era signaled on May 24, 1991. The painful, incontestable and nostalgic memories of the thirty years of war rewarded the tenacious people freedom and tranquility. As any reasonable person can grasp, why Eritrea’s historic struggle for independence is always mentioned as part of the most top superfl uous and unique revolutionary paths is, therefore, indecipherable profound reason.

History tells us that many revolutionary movements were deemed to fail due to internal split and foreign interference before the ring any result to what they were established for. Others who gained their independence through arduous struggle were seen to fail to form a viable government because of foreign interest groups eager to expand their sphere of infl uence and pave the way to control natural resources of those countries. This fact is true in many African countries that gained their independence in the 60s.

Fortunately, same to the aforementioned case did not materialize in Eritrea, the month of September in 1961 gave birth to May 24, 1991. As I unfl inchingly believe, the EPLF unlike the otherfailed revolutionary movements had situated its all-rounded principles of self reliance, deep nationalism and readiness to sacrifi ce for a cause on solid ground by inculcating it in the heart and mind of the Eritrean people in general and the liberation fi ghters in particular. And it is because of the rightful leadership of the revolution and farsighted vision that Eritrea won its independence by not waiting and raising its arms for external help. To this date the people and government of Eritrea believe in hard work and determination to develop the country depending from internal resources and human capacity. And the Eritrean people are celebrating this hard won independence with enthusiasm and fervor spirit every year.

And it is unfortunate that some from the West, especially the so called intellectuals who are backed by notorious political organizations, perceive East Africa as land of restless confl ictswhich have been emanating from narrow political ideologies. Hence, these negatively fabricated terminologies have been setting this region in the much defamed position by baptizing it with different names; the land of conspiratorial war games and mass carnages. However, as we have assured the world that we are not among the frail societies who are ready to sell their holly pledges for easily penetrable issues, as September has witnessed theprolific success we are registering,
the foundation we are laying for the bright future, and the fruit that we are about to harvest in terms of economic development, Eritrea is not going to look back from heralding peace and development in our region. And surely there is no any likely impasse which could restrict this nation of determined people from doing miracles.

An Event that Highlighted the Desire for Development and Friendship

Encouraging Result and a Big Lesson to Learn