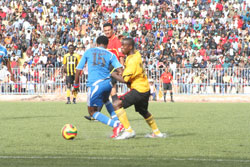 On 28th August, 2010 a trying final match between Eritrea and Uganda took place at the Asmara stadium. Both national teams swept through the stage matches garnering first positions from their respective groups.  It was certain beforehand that the two teams, Red Sea Camels and the Cranes, would engage in a very trying match.

Saturday afternoon exactly at 3:35 p.m. the decisive match started with fairly vivid movements. Two riveting attempts of the Red Sea Camels in just about ten minutes of the first half spiked the tempo of the match.
Contrary to Frank Angnew claims that the pressure would be on the Red Sea Camels rather than his team that would play the match with ease, the Cranes  were engrossed in a very hard contest against the unrelenting Red Sea Camels throughout the 90 minutes of regular time as well as for 30 additional minutes. It was indeed a trying moment for the Cranes and the pressure was the other way round.

Since the event was about to tie up the hard endeavors that continued throughout the tournament to prove the champion of the CECAFA U-20 cup, it was indeed equally challenging match for both national teams of.
The final match fully gripped the emotions of the fans who were eager to be rewarded a trophy in that historic and suspenseful moment. In about 110 minutes of play Yohanness Nega while trying to divert the crossed kick

by Ugandan player Hakim Senkumba, scored a goal against his team.  The Cranes were in their cloud nine for they scored a winning goal. Nevertheless, Tesfalem Tekle, a mid fielder to the Red Sea Camels, rewarded the devoted fans through the goal he scored in the high time. Despite the many attempts of the Red Sea Camels, the game drew 1-1 in the 30 minutes additional time.

However, only one of the teams had to hold the championship position. Thus, the winner was decided through penalties. Since Eritrea missed one kick in the penalties, owing to the chance of scoring in penalties the Cranes held first place of the two week- long tournament and earned the Development and Friendship Cup and monetary award of 8,000 USD. Eritrea achieved second place in the tournament and won 6,000 USD in monetary prizes. Kenya stood third beating Rwanda 1-0 in the match that was held prior to the final game. Kenya also won of 4,000 USD.

Making through to the final game indeed shows that the red sea camels have done their level best to become the champion of U-20 cup. They proved

to be a committed team. They held the game until the 30 minutes additional time and up to the penalties. Uganda’s coach   describes Eritrea’s national team as hard working and very determined.

Captain of the Cranes, Sadam Juma, one of the best players of the Ugandan U-20 national team appreciated the hospitality as well as the moral boost of the diehard football fans who continued to cheer the red sea camels until the last minute of play.The participant teams of CECAFA 2010 tournament as well as the CECAFA officials said that Eritrea is undoubtedly a land of friendship, mutual respect and development. Following the end of the match Mr. Frank Agnew described the hospitality and the reception of Eritreans as exceptional.

During the evening of 28th August a closing ceremony for the two week-long soccer tournament was conducted at the hall of Central Region administration. Present on the occasion, Mr. Kahsay Ghebrehiwet, Administrator of the Central Region said that such tournaments could promote friendship and development among the people of the CECAFA region. He also reiterated that Eritrea is capable to host similar and bigger tournaments and is also committed towards doing so. Mr. Nicolas Misogne, general secretary of the CECAFA on his part stated that the 5th CECAFA tournament that was held in Eritrea enabled them to cherish unfading memories on their minds.
In the farewell occasion, the Administrator of the Central Region awarded medals to the national teams of Uganda, Eritrea, Kenya and Rwanda that stood from first to a fourth place respectively in the tournament as well as to the referees who supervised all 21 matches. Gifts were also delivered to the CECAFA officials.