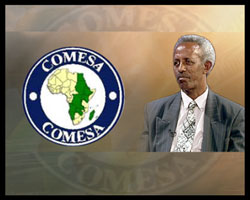 The Minister of Trade and Industry, Mr. Estifanos Habte, participated in the 14th COMESA Summit that was held in Lozitha city, Swaziland, from August 31 to September 1.

Asmara, 3 September 2010 – The Minister of Trade and Industry, Mr. Estifanos Habte, participated in the 14th COMESA Summit that was held in Lozitha city, Swaziland, from August 31 to September 1.

In the summit conducted under the theme: “Harnessing Science and Technology for Development,” the COMESA member states reached understanding on the need to reinforce efforts and allocate enough budget in research and communication technology, set up joint science and technology parks, as well as utilize  biotechnology  in the agriculture sector and nano technology in the health sector.

The summit also assessed the developments registered in the tripartite-free-trade among the COMESA, the South Africa Development Community and the East African Community, besides giving work directives as regards the finalization of the process.

Taking note of the significance of the prevalence of peace and security in the COMESA region towards attaining development and facilitating the economic integration process, the summit held extensive discussion and adopted resolutions and recommendations.

Also in a meeting held earlier beginning from August 18, the unilateral governmental committee, the Ministers and Foreign Ministers Council reviewed the tasks accomplished last year, in addition to submitting the proposal of the action plan for next year to the COMESA member states summit for approval.

COMESA is a regional organization comprising 19 countries from Eastern, Southern and Northern Africa.

The Eritrean People’s Support Of The Armed Struggle For Independence