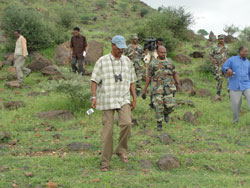 Having presided over the fourth graduation ceremony held last Saturday at the Vocational Training Center in Sawa, President Isaias Afwerki conducted inspection tour of agricultural programs in six sub-zones of Gash-Barka and Anseba regions from August 22 to 23. The President visited the sub-zones of Golij, Teseney and Haykota in Gash-Barka region, as well as the sub-zones of Hagaz, Elaberéd, and Adi-Tekelezan in Anseba region, during which he observed the condition of crops, agricultural infrastructure facilities, micro-dams and the amount of water they have accumulated, as well as other development activities. He also exchanged views with administrators and experts.President Isaias Afwerki set out for a tour of inspection westward from Teseney town early Sunday to observe agricultural activities in the Gash-Barka Region. He arrived at Golij before daybreak after a 60 km long mileage across the hard-packed dirt road. Whilst looking at the growing crops on both sides of the dirt road, the President made his way to Omahajer Administrative area so as to inspect agricultural undertakings at the vast plains around Kachero. After examining the cultivated large farmland, he then proceeded towards Gerset. Accompanied by Mr. Mussa Rabá – administrator of the Gash-Barka Region – as well as experts, he observed the volume of water Gerset dam has impounded and the infrastructure facilities put in place. In the course of his inspection on the cereal plants and sugar cane cultivated on the vast plains around Gerset, he shared views with pertinent experts as regards the impressive chievements registered thus far and future plans. In order that all development activities being carried out and future programs around Gerset Dam could effect the desired outcome, the existing irrigation system necessitates permanently converting to automation, President Isaias emphasized.He later observed the construction of 500 foam-made precast residential houses underway in the area. Needless to say local inhabitants in the area ought to be beneficiaries, the President pointed out that such a project has to fulfill the requisite social services. Managers in the area explained to the President that pilot projects ran in the area to try out the fertility

and suitability of farmlands for varied vegetables and cereal crops have yielded well over 400 quintals of onion per hectare. Indicating the accomplishments are in keeping with Eritrea’s priority program for sustainable food security, the President stressed the need for enhancing such activities in a manner that greatly involves the general public.

President Isaias also headed for the Fanko-Rawi and Fanko-Tsmué dams respectively to observe their situation. After inspecting the Fanko-Rawi dam in Teseney and Fanko-Tsmué dam in Haykota sub-zones, as well as the volume of water the dams have impounded and the vast plains under cultivation, President Isaias put forth views as regards the endeavors needed to go the extra mile for land leveling, thereby effecting better output. The President also visited the Gash Bridge around Alebu, which has made transportation, the movement of local inhabitants and livestock possible during the summer season, thanks to Gedem Construction Company. The eight m high, 16 m wide and 116 m long bridge was finalized last year adjoined to the 5 km long and 10.2 m wide asphalted road reaching the Haykota-Teseney road.The President subsequently headed to Aligidir and observed a micro-dam along with canals under construction at substantial investment by Homib Construction Company. The micro-dam, which has already accumulated satisfactory volume of water, is expected to promote irrigation farming on about 4,000 hectares. He also observed the land that was barren in previous years and currently cultivated through coordinated endeavors, as well as a stone miller plant set up in the locality, during which he conducted discussion with Mr. Mussa Rabá – Administrator of Gash-Barka – Mr. Teklebrhan Gebreweldi – administrator of the Teseney sub-zone – and engineers working in these areas on ways of reinforcing the outcome.Engineers in the project expressed that the micro-dam has currently impounded six meters deep volume of water and yet can accumulate a substantial amount of water owing to the good pattern of the rainy season. The President on his part forwarded vital view to fortify the micro-dam as deems fit through popular campaign with a view to protecting the water from drainage to waste. He also discussed with experts about the prospective contribution of the stone miller plant in the development drive. Installed ultimately to this end, this newly set up miller

machine can grind per hour 120 tons of stones of different size.

President Isaias proceeded towards Anseba Region on Monday, where administrator of the Region Mr. Gergis Grmay, welcomed him upon arrival. The President inspected 60 hectares of sorghum and millet plantations, as well as 20 hectares of taff being piloted under cultivation through integrated farming in Daérotai plains. He further observed the 400 hectares of cereal crops being cultivated through integrated farming in the Admay plains, 20 km from Hagaz town, that are in good condition. Following the explanation given by the administrator of the Region, the President lauded the tasks accomplished, and exchanged views with the Administrator on ways of enhancing such activities and promoting public participation in the undertaking.Amidst good rain showers, the President made an inspection tour of Elaberéd Agro-industry for 2 hours and observed the tomato paste plant being renovated and expected to begin service shortly, the sorghum and corn farmlands cultivated on about 400 hectares which are in promising condition, as well as micro-dams that have already accumulated sufficient amount of water. Expressing appreciation to employees of the agro-industry, he reminded to step up efforts in a manner that would bring about change in the livelihood of the general public.

In respect of the development activities being carried out, Administrator of Anseba Region, Mr. Gergis Grmay, stated that production of the agro-industry has reached a promising condition as a result of consorted endeavors of the administration, the people and stakeholders. In addition, he visited the micro-dams of Deroq, Sharki and Dekemhare that were constructed to ease potable water supply problem the local inhabitants used to encounter.

The Terrifying Walk To The Aisle