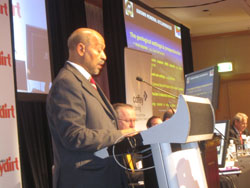 The Minister of Energy and Mines, Mr. Ahmed Haj Ali, participated in the Mining Investors Conference that was held in the Australian  city of Perth from September 1 to 3.

Asmara, 4 August 2010 – The Minister of Energy and Mines, Mr. Ahmed Haj Ali, participated in the Mining Investors Conference that was held in the Australian  city of Perth from September 1 to 3.

In the conference in which a number of heads of mining companies, banks and financial institutions, as well as investors, mining consultants and media outlets from different parts of the world took part, Mr. Ahmed indicated that the development registered in the Eritrean mining sector within a few years is being the main attraction of tourists.

war-ravaged socio-economic infrastructures.  In this respect, he explained that solid ground has already been laid for investors, besides creating reliable opportunities.

Noting that at present about 17 companies are undertaking mining activities in Eritrea, Mr. Ahmed underscored that such  number of investing companies that continues to grow from year to year fully attests to the prevailing peace and stability in the country, coupled with the existing encouraging infrastructure facilities and favorable atmosphere.

Minister Ahmed Haj Ali went on to say that in accordance with the preliminary study, the entire Eritrean Red Sea coast is located in the best investment belt, and as such called on investors to make good use of the available investment prospects in Eritrea.

Donations in support of martyrs’ families being stepped up