CECAFA Tournament 2010: Stepping Stone For Development Of Football And Friendship 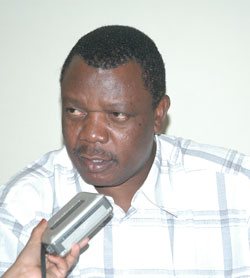 Besides winning a trophy, sports competition is carried out to foster friendship and strengthen harmony among the participants. Indeed, the hosting of the 5th Central and Eastern Confederation of African Football Association (CECAFA) Cup under 20 in Eritrea was a true reflection of the sprit of sport. It could be said that the event paved a way for close ties among the national soccer teams of Eritrea, Tanzania, Sudan, Kenya, Somalia, Uganda, Rwanda and Zanzibar as well as Yemen. Besides, it was an eye-opening occasion for the participants to know about Eritrea and its hospitable people.  CECAFA is known as the oldest sub-regional football competitions in Africa and Eritrea became a member in 1994. At present, CECAFA has 11 members, and this year’s tournament was held under the theme ‘Friendship and Development’. Shabait conducted an interview with the General Secretary of CECAFA, Mr. Nicolas Misugne regarding the tournament held in Asmara. Excerpts follow:

Let’s start with your evaluation of Eritrea’s preparations to host CECAFA?

It was one of the most successful tournaments held in recent years. I really want to express my appreciation of the way the preparations were made. The opening ceremony was fantastic. The artistic shows that highlighted the Eritrean diversity were amazing. The excellent organization prepared by a young nation such as Eritrea was beyond our expectations. It is an indication that this country is capable of hosting big tournaments providing some facilities in the near future.

How about the technical ability of the players?

Yes, the game exhibited by all the players was so impressive. I think we are showing improvement in our members of CECAFA teams in terms of technical ability. I really want to express my appreciation of the way the national teams prepared themselves for this competition.

What is your impression of this country in general?

I can see that Eritreans are talented at football, cycling and athletics. And if Eritrea gets enough facilities they would have the upper hand in these kinds of sports. Also, I am impressed with the prevailing peace and security in Eritrea in addition to the wholesome weather. On top of this, the warm welcome and hospitality accorded to us wherever we went attest that the people of Eritrea are a peace-loving and hospitable people. I would say they are people who believe in themselves and I attribute this to the strong leadership you have in this country. I have traveled in many African countries where there is disorder and chaos. Nothing like that can be seen in Eritrea.

What experience can be gleaned from the way Eritrea has hosted the game?

We can recommend that Eritrea has the ability to host similar upcoming games in the African Cup of nations under 17. Eritrea had the capacity to host it once some facilities are put in place. Other members of CECAFA could also learn from Eritrea’s excellent organization.

The tournament in Eritrea especially has promoted friendship among us. It was an excellent opportunity to extend our friendship and also the participations were able to know and understand Eritrean.