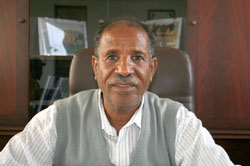 The Administrator of Anseba Region, Mr. Giorgis Girmai, disclosed that efforts to renew Elabered Agro-Industry to enhance its products are registering encouraging outcome.

In an interview with ERINA, he said that the Administration of Anseba region has assumed responsibility of the plant from February this year, and the previously encountered problems have now been resolved. Mr. Giorgis also stated that the provision of water which was the main concern has been ensured through the concerted efforts of the Administration and people.

The manager of the Agro-Industry, Mr. Michael Teklemariam, said that seven dams found within the plant have accumulated sufficient amount of water, and that the cultivated farmland are making satisfactory progress thanks to good rainfall.

Explaining that the plant’s top priority is to boost dairy product, Mr. Giorgis indicated that the Agro-Industry has managed to raise milk production from less than 700 liters to about 1,200 liters per day.

Elabered Agro-Industry Plant, which is found along Asmara-Keren road, spreads over 1,200 hectares of land out of which 350 have been put under cultivation now.