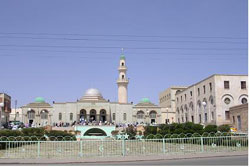 The coming days will be the end of the Holy month of Ramadan for Muslims around the globe. Holy Ramadan is, a time for followers to abstain from eating, drinking, and smoking during the day, and end their fasting with the sunset, in traditional meals and sweets. During this time, Muslims are also encouraged to read the entire Qur’an, to give freely to those in need, and strengthen their ties to Allah/God through prayer. The goal of the fasting is to teach humility, patience and sacrifice, and to ask forgiveness, practice self-restraint, and pray for guidance in the future. Ramadan is also a time to focus on self-reformation, spiritual cleansing and enlightenment. It is a time in which the faithful are expected to manifest good behavior through prayers, supplication, charity, good deeds, kindness and helping others. Since it is a season of giving and sharing, Muslims prepare special foods and gifts for their family and friends and give to the poor and needy who cannot afford it.

“Dan-dan tsbah iya Ramadan – Dan-dan tomorrow arrives Ramadan”. (Dan-dan has no specific meaning and is simply used here to rhyme with the last syllable of Ramadan; after all, this is a simple couplet crafted by the creative minds of children). This sweet short melody though which we used to sing aloud in the eve of Ramadan is what first comes to my mind in connection with the arrival of the Holy Month of Ramadan. With the mosques lights glowing, the hectic shopping for Ramadan stuff by the faithful and the recital of Qur’an by the Sheiks heard from the minarets are all harbingers of the arrival of Ramadan. Especially for children, that night is full of atmosphere of smells, excitements and anticipation – simply unforgettable.

When I look back on my childhood memories of celebrating the blessed month of Ramadan, different images flash through my mind. Indeed, childhood world is unimaginably rich in fond memories and the presence of Ramadan evokes warm reminiscences. I remember meeting early in the first morning of the Holy Month of Ramadan, before going to school (since Ramadan follows the Islamic lunar calendar, it moves through out the year and when we were kids it was observed during schooldays), with my childhood friends and asking each other if we were fasting or not. Every one of us would stick out his tongue to show its color and to prove that he was really fasting. If it was white then you passed the test, otherwise you were teased. I remember our strange practice of spitting frequently, trying desperately to have nothing in the mouth while fasting. It was so strange habit that I really wonder now how we managed to survive the whole day with dry tongue and throat. Looking back, I realize now that we never knew why we were fasting or praying. But fasting was something that you wanted to do as a child. It was thrilling to simply do it because our parents and elder brothers and sisters did so.

After school, as our families gladly allowed us to spend endless hours out, we would roam the streets of Asmara and our favorite place to visit was “Mai Jah Jah”, a water fountain resort area with surrounding flowerbeds in the heart of Asmara. I really don’t know why we frequented that place but maybe it was because of the flowing water and by simply looking at it we dreamily quenched our thirst. We also enjoyed looking at street vendors hawking their sweet-scented merchandize displaying on a long counter for all to see and smell. As young boys we enjoyed the show, the smell, the chanting from the nearby Grand Mosque, the hustle and bustle of the people buying Ramadan groceries. There were no game houses or internet cafés back then for us to spend our times and playing outside and roaming the streets was the only option.  But we had a quality time together playing and giggling until we were completely exhausted till the Iftar time arrived.

And back home, after prayers of Maghrib, the family members would often join together to end their fasting. We would have salads, soup, pastries, sweetmeats and all kinds of delicacies just waiting to be devoured. I don’t remember when watching Arabic series film (musalsal) has become a tradition, after Iftar. When we were small children there was no satellite-dish receivers perched up on the roofs of almost every household like these days. In fact, very few families owned black-and-white TV sets at that time and you needed to appease the TV owners if you wanted them to let you watch in their houses. After Iftar, it was time for strolling in the streets to take some fresh air and socialize with people from the neighborhoods. One could easily see the various facets of social interactions manifested during that time. And after that it was time for the last prayers of the day and the special prayers, called Tarawih, which are held in the mosques every night of the month, during which almost the whole section of the Qur’an is recited.

But what I remember most and what remains indelibly vibrant in my mind is the excitement that we had when we shared Sambusas (fried conical shaped pastry filled with ground meat) and Meklils (fried sugared dough) with our Christian friends. We would wrap the stuffs in a piece of paper and surreptitiously sneak out of home for fear of being stopped by our mothers to check if we had not taken more than what was allowed. We never asked for reciprocity from our friends. We simply enjoyed sharing what we had and passing and enjoying the time together. Ramadan is a time of sharing and giving and we were unconsciously trying our best to exemplify the very spirit of it: the culture of sharing whatever you have with your. This idea of sharing was planted in our minds and we are lucky enough that it grew up with us. I believe this habit had a significant impact in creating everlasting and strong bonds of friendship among the peers.  It was later on when we grew up that we learned how the habit of sharing what you have with your neighbors and friends kept the Eritrean people together during the tough times. Still one of the most distinctive characteristics of the people of Eritrea is sharing what you have and enjoying it with your fellow citizens.
At night, about an hour before the break of dawn, we would get up and join the family members for Suhoor, the meal that is supposed to give you the last vigor for the tough day ahead. Getting up for Suhoor was the toughest part of fasting because we had to wake up from the good night’s sleep but as children we were determined to keep our swollen sleepy faces sober for that was a condition either to be allowed to be fasting or not. If you successfully passed the first few arduous days of waking up then you were licensed to be available at family Suhoor scene at the table till the end of the month.

These are some of the resplendent Ramadan childhood memories that will be rekindled crystal clear in my mind whenever the Holy Month of Ramadan is around. After the final days of fasting, the holiday of breaking the fast, i.e., Eid Al-Fitr begins lasting for three days. Kulu Amm Wo Antum BiKheir or Eid Mebruk are the sweet words that open the cornucopia of fruits, peanuts, biscuits, caramels, sweetmeats, abake etc… Ramadan kerim and the Eid Al-Fitr  that follows this.

Instilling the Norm of Excellence: The Zagre Award( Part I)