Preparations In Full Swing To Award The Zagre Prize 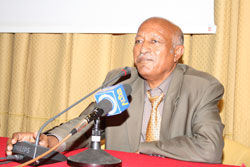 Preparations are in full swing to award Zagre and other prizes to students who scored 3 points and above in the National School Leaving Certificate Exams in the 2009/2010 academic year.

Asmara, 8 September 2010 – Preparations are in full swing to award Zagre and other prizes to students who scored 3 points and above in the National School Leaving Certificate Exams in the 2009/2010 academic year.

In an interview he conducted with reporters, the Minister of Education, Mr. Semere Russom, indicated that the awarding ceremony would be held on September 14 here in the capital, and that the growing number of Zagre awardees amply demonstrates the achievements being registered in the development of the education sector.

He further highlighted the significance of the Zagre Award in cultivating the spirit of competition and hard work among students as manifested in the impressive results scored from year to year. As such, the program would continue in an enhance manner, he added.

Noting that the award shoulders big responsibility on the students to demonstrate still greater excellence in their academic pursuit, the Minister pointed out that study is underway to award similar prizes to educational development and the impressive student performance being witnessed at different levels.

Mr. Semere went on to say that the achievement scored is the outcome of the coordinated endeavors of students, parents, teachers, schools and the general public.