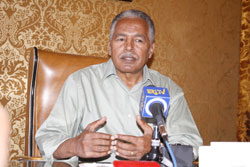 It is hard to expect bumper harvest depending on rain fed agricultural activities in Eritrea, because the amount and distribution of rainfall is usually unpredictable. For this very reason, the Government is engaged in developing water conservation schemes so as to conserve rain water and enrich underground water sources. In this manner, the availability of sufficient water could be secured and the plan to achieve food security on the basis of self-reliance could be effectively realized. As part of the Government’s endeavors, various soil and water conservation activities are being carried out in the Central region. About 64 dams and 6 ponds with the capacity of holding 15 million cubic meters of water have been constructed. These reservoirs now hold about 12 million cubic meter of water. Shabait conducted an interview with the Administrator of the Central region, Mr. Kahsai Gebrehiwet regarding these water conservation endeavors and other topics. Excerpts follow:

Let’s start with the contribution of the constructed dams and ponds in the Central region?

They have a very significant role to play since this region, predominantly characterized by plateaus, has very narrow catchments areas. Usually the rain water flows through the four regions of the country and constructing dams is essential to conserve it.  With the climatic advantage of the region, even micro-dams are able to survive in the hottest months. Most of the time, the region is covered with cloud, fog, moisture, it is very rare for the temperature to rise high.  The huge number of dams constructed at substantial expenditure is used for potable water supply and agricultural purpose since the rain fed farming lands are very limited. Through horticulture – fruits and vegetables cultivation – farmlands could be put under cultivation throughout the year. Thus, the construction of these dams is part of soil and water conservation, enriching underground water sources and bringing ecological change in the surrounding.

Can you tell us about the reforestation programs in this region?

This region is working vigorously in reforestation activities as part of the national program which in turn would enrich underground water sources, prevent soil erosion, ensure animal feed to boost dairy and meat production. Besides, places with stable climatic condition like this region are less influenced by the global warming, and have better chance of getting rainfall. Based on scientific finding, we are working more focused in reforestation program as the region has advantage in obtaining rainfall.

What are the new agricultural methods being introduced?

We are trying to introduce drip or sprinkler irrigation replacing the previously used methods. And this would improve agricultural output seven fold. Some of the villages have already finalized preparations to implement this type of irrigation. Therefore, I could say that it is now time to utilize the dams wisely with the increasing number of agriculture experts and provision of facilities.

How do you evaluate the efforts to achieve food security?

All Government policies are aimed at achieving food security and strenuous efforts are being exerted to put in place the necessary facilities. The undertaken programs so far are part of the national strategy to realize the outlined objectives and would play major role in achieving gratifying outcomes in the agriculture sector. This would enable farming communities to improve their living standard.

Tell us about the activities of the farming communities?

Farming communities in Eritrea are at the forefront of the government’s plan to achieve food security. They have more experience, and we are trying to help them to boost their production by introducing scientific methods in collaboration with agricultural professionals. In this respect, agriculture experts are assigned in 84 villages, which means that there is one agricultural expert in each village. Moreover, 5 agricultural professionals are deployed in each of 6 stations of the region.

What programs have been outlined for the near future in this case?

At the beginning we started from scratch and we have gained experiences and strengthened capacity through time. We are trying to introduce effective methods to conserve water and survive even during erratic rainfall season. Furthermore, the climatic condition of this region is not only determined in terms of rainfall but also the cold and hot seasons. We have started planting crops which can adopt to the temperature of the area in villages such as Shmangusi La’alay, Geshnashim and Mekerka.

I would like to express my appreciation to those citizens engaged in farming and encourage them to continue their efforts to finish the remaining task for this year. I also urge them to reinforce efforts to extend support to disadvantaged nationals as well as families of fallen heroes.

Out With The Old And In With The New: New Year In September