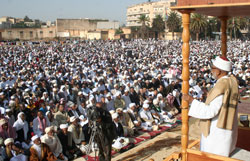 Eid Alfetir Al-Mubarak was today celebrated across the nation in a colorful manner. In celebrations conducted at the Bahti Meskerem Square here in the capital, salat Eid led by the Eritrean Mufti, Sheik Al-Amin Osman, was conducted in which tens of thousands of the faithful took part.

Asmara, 10 September 2010 – Eid Alfetir Al-Mubarak was today celebrated across the nation in a colorful manner.
In celebrations conducted at the Bahti Meskerem Square here in the capital, salat Eid led by the Eritrean Mufti, Sheik Al-Amin Osman, was conducted in which tens of thousands of the faithful took part.

In a spiritual message he conveyed, the Mufti wished a Happy Eid to the Eritrean people in general and followers of the Islamic faith in particular, and indicated that the Ramadan month represents a period of self-restrain and mutual collaboration, while Eid reminds us all to demonstrate forgiveness and mutual support. In this connection, Sheik Al-Amin expressed goodwill that the Eritrean people strive to develop the nation through keeping intact their respective faiths and unity.

Also in celebrations conducted in front of the Al-Khulafa Al-Rashideen Mosque following the prayers, Ministers, senior government and PFDJ officials, as well as diplomats took part. The Mufti pointed out that the Eritrean people have been living in harmony and coexistence for centuries, and expressed conviction that they would reinforce the nation-building endeavors through preserving such sacred and noble values. Sheik Al-Amin further wished bumper harvest in this good rainy season.

He went on to say that priority assistance should be given to families of martyrs and orphans, and called on every citizen to support them.

Also on the occasion, students and teachers of Koran and Mohad schools presented various songs and drams highlighting the religious holiday, thus adding color to the celebrations.

Meanwhile, public holiday was conducted in Mai-Nefhi in connection with Eid Al-Fetir through the collaboration of the Information Ministry, the Eritrean Institute of Technology and the Central regional Administration.  Speaking at the celebrations which were transmitted live via ERI-TV and Dimtsi Hafash, the deputy president of the Institute and the head of academic affairs, Dr. Gebreberhan Ogbazgi, congratulated the Eritrean people at home and abroad, as well as members of the Defense Force on the occasion of the religious holiday. He noted that substantial investment is being made by the Government to develop the education sector which is bearing fruitful outcome.

Stating that such investment has a long-term effect and not on short period, Dr. Gebreberhan indicated that the number of students at all levels used to be only 180,000 in 1991 has dramatically climbed to 700,000 at present. The number of students joining university has also increased from 1,500 to over 10,000, which in turn fully attests to the outcome of the endeavors.

He stated that the graduates of the Institute are already serving the nation and the people in their respective fields, and that there are plans to launch new programs this year in the Institute.