Out With The Old And In With The New: New Year In September 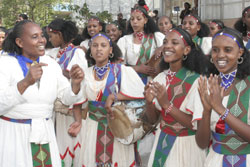 The celebration of this New Year goes back to the early settlers in the area; though Israelis are believed to be the first ones that introduced September as the first month of the year.  In the Old Testament, it is believed that the new season after the great floods begun with the month of September. It is also the beginning of a sunny weather in which crops are gathered and harvested; the flowers blossom after heavy rains, chilly weather and hard work of summer. As a result, this new beginning is celebrated with great joy, especially in the rural area of the country, as a season of happiness and reunions where most of the pastoralists that left their hometown to feed their livestock return at the beginning of this month.

Though the mode of celebration differs, majority follow the same rituals in celebrating this event. Few weeks before the actual day, youth of a certain area will gather dried twigs to prepare torches for this special event. Most of the time, this is done by the males in the family. And the females in the family will go to the streams and wash in the early mornings for almost a week where they spend the entire time singing and dancing.

On the eve of the New Year the males in the family will put wild plants on their heads and light their torches, while the females plait their hairs in various styles and put a tiara of the spring flowers on their heads. In the evening, mothers of the family will prepare porridge for their families and once dinner is over, the entire family gathers in a near by elder’s house to light torches. Later the elder of the family will take one of the torches and circle the house and say prayer, blessing both the family and the livestock. After this is done, the rest of the family will cross over the fire three times, reciting the same prayers.

And when the bells of the church start ringing, every one will go to the church carrying a torch on hand. In the church, reports of the society’s activities of the year will be announced to the congregation and after a prayer for a new start, the youth particularly, the males circle the church three times with their lit torches and after that the people will gather at the center to sing and dance till dawn.

While this is how the New Year is celebrated in majority of the country’s rural areas, in some areas after the recitals in the church ends, the males of the society will leave to the meadows of the area. Those leaving for the meadows should be 15 and above and the leader will make sure to have a well organized team before leaving for the meadows. All the way to the meadows, they will sing and dance and are allowed to eat and drink in any ones farm. Once at the meadows, they will gather around a huge tree and prepare to return. The moment the songs are heard in the outskirts of the home town: mothers, girls and others that did not go to the meadow will go out and receive them with great honor.  After their arrival they will sing dance and party till dawn. On the day of the New Year, women of the area will repeat the same ritual as the men and return to their homes having flowers and crops on their hands.

This celebration is an event where people gather from all over the country to celebrate a new beginning and share the products of the summer. In the old times, it was also an opportunity for the men to look for a bride and for the women to present their beauty. It is also the time that young boys acknowledge their adulthood because being chosen to leave for the meadows proves a boy’s maturity.

The amazing fact about this holiday is, in the present world of technology and civilization this unique holiday is celebrated the same way as it used to be centuries ago. Not much has changed in the rituals and the decorations worn by both men and women. And this is one of the few things that this era of globalization is unable to change.