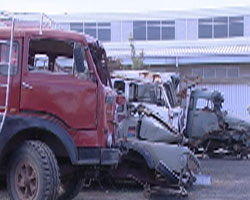 He said that 1,704 accidents have taken place in the past few months in general in which 51 lives were lost, while 859 sustained serious and minor injuries, and property estimated at more than 17 million Nakfa was destroyed. Captain Girmai further explained that 70% of the traffic accidents happened in the Central region. He went on to state that of all the accidents, 885 vehicles crashed into other vehicles, 184 collided with pedestrians, 94 with bicycles and 163 tumbled to the ground.

Pointing out that unviable roads, unsafe vehicles and disregard of traffic regulation are additional causes for accidents; he called on every citizen to drive responsibly and abide by rules and regulations.

Captain Girmai, said that the Eritrean Police Traffic is making relentless efforts with its partners to minimize traffic accidents, and stressed the need for constant training to enhance awareness among the society.

The public on their part emphasized the importance of continuous and intensive campaigning at national level.