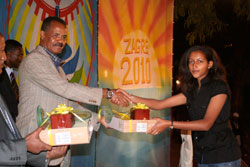 On the occasion, President Isaias Afwerki awarded the Zagre Award medallion bearing inscriptions of the students’ names and laptop computers to 253 students, out of whom 63 are females, who scored full mark in the examination. Moreover, the President also handed out special prizes to those students who were able to succeed despite various constraints.

Speaking on the occasion, President Isaias congratulated the awardees and their parents and pointed out that although the double fold rise in the number of outstanding students this year is a measure of success, it also raises a number of questions. “The fact that the wealth of a nation or the nation building process is measured not in terms of natural resources but through hard working, productive and skilled human resources is a truth that had been clear even before independence,” he added.

Indicating that the success achieved at the present stage of the nation building has been realized regardless of all-round hostilities, President Isaias stated that the continued attempts to obstruct the country’s educational and training programs are aimed at disrupting the nation’s wealth of educated youth, assuming one of the most important resolute rebuff fronts.

The President finally reminded all the awardees that the recognition they have received is merely the beginning, and called on them to maintain their efforts and determination in a manner that secures continuity of excellence by promoting skills, knowledge, creativeness and innovation.

Besides, about 791 outstanding students who scored from 3 to 3.8 points in the exams received laptops, financial and other incentive prizes at the hands of the Minister of Education, Mr. Semere Russom. 19 of the awardees are students pursuing their education in the Eritrean Community International School in Jeddah and Riyadh, Saudi Arabia.

Speaking at the awarding ceremony, the Minister of Education, Mr. Semere Russom, congratulated the awardees, especially those students from remote areas who emerged victorious through overcoming various types of adversity. He pointed out that the Government is making substantial investment to human resource development and the expansion of equitable educational opportunities in different parts of the country.

Mr. Semere further explained that the tasks so far accomplished lay solid ground for achieving the set goal and underlined the need for exerting still more endeavors as ensuring the quality of education along with expanding schools and building competent manpower could not be realized overnight.

Ministers, senior government and PFDJ officials, as well as parents and invited guests participated in the Zagre Awarding ceremony which was transmitted live Eri-Tv and Radio Dimtsi Hafash.