Augmenting food reserve is the guarantee of national objectives and vision: President Isaias 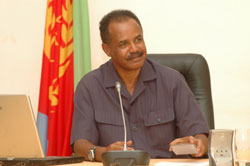 President Isaias Afwerki underlined that augmenting food reserve through raising productivity is the guarantee of national objectives and vision. He made the salient remarks at the closing session of the meeting of Regional Administrators in Mendefera town yesterday.

Mendefera, 16 September 2010 – President Isaias Afwerki underlined that augmenting food reserve through raising productivity is the guarantee of national objectives and vision. He made the salient remarks at the closing session of the meeting of Regional Administrators in Mendefera town yesterday.

t is to be noted that the main agenda item of the meeting in which Regional Administrators and the Minister of Agriculture took part focused on the progress made regarding the country’s food security strategy as well as a preliminary assessment of crop harvest in 2010. Following extensive discussion on the report presented by the Minister of Agriculture, Mr. Arefaine Berhe, and the regional Administrations, the meeting held in-depth discussion on the working paper presented by President Isaias focusing on reinforcing development programs and strengthening all-round popular participation.

In his briefings, the President pointed out that the mission and work programs of the administrations is that of playing a leading role to improve the people’s standard of living, providing reliable social service and take the necessary just administrative initiatives that would ensure the security and welfare of the people. In this respect, he reminded the regional Administrations to strengthen organizational and work methods aimed at promoting all-round popular participation in multi-faceted development programs.

Indicating that crop harvest for 2010 in all parts of the country is expected to be higher than that of pervious years, President Isaias explained ensuring food security implies

continued growth of national food reserve through raising productivity and applying efficient saving mechanism. Elaborating that achieving food security is not the sole ultimate objective, he called on the people and Administrations to look beyond and strengthen export-oriented economic activities. In this respect, the President underscored the need on the part of every region to properly identify the available relative advantages, organize and agitate the inhabitants, reinforce economic activities, and thereby strive to boost regional output alongside endeavors to augment overall national productivity.

Pointing out that Eritrea’s potential to develop animal resources is not to be viewed lightly, President Isaias stressed the need for the regional Administration to draw up and implement concrete programs to develop livestock resources, and that the Agriculture Ministry should make due professional support to this end.   In this connection, he emphasized that an end should be put to the practice of unrestrained export of livestock in a manner that benefits the nation. President Isaias further explained that a national corporation has been set up to coordinate activities to this end. He also reminded the Northern and Southern Red Sea regions to strive for adequately harnessing marine resources at their disposal, as well as create conducive ground towards enabling the local inhabitants enhance productivity in the sector.

President Isaias went on to shed light on the major projects envisaged towards reinforcing the on-going activities designed to  enhance national productivity and economic growth in 2011 on the basis of putting in place water conserving infrastructures, construction of strategic roads,  soil and water conservation devices and expansion of social services.

Commending the impressive contribution of members of the Defense Force in multi-dimensional development projects, the President noted the need to create viable environment that would enable the population at large to assume the responsibility of implementing all the national development programs.

Reaching understanding that the country’s Administrative regions present development plans for 2011 next month that outline priorities and demands of the population in a concise manner, the one day meeting of Regional Administrators was concluded yesterday.

The Zagre Award: Instilling the Norm of Excellence ( Part II and Final)