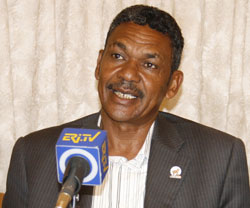 Regulating and preserving the natural resource of the country is one of the main tasks of the Ministry of Agriculture.  This is aimed at restoring forestry that was natural beauty of the country once covering 30% of the total land area. The greenery campaigns undertaken every year through summer work program coupled with community based campaigns are some of the endeavors of this Ministry to this end.  Shabait conducted an interview with Mr. Estifanos Beyin, Director of natural resources regulatory division at the Ministry regarding the country’s vegetation distribution and conservation activities.

Let’s start with the natural resources of the country?

Can you explain to us the general structure of the natural vegetation of Eritrea?

It can be classified in to four parts. The first one is disturbed and dense forestry, (tropical or sub-tropical forest) that includes the Green-Belt in the eastern part of the country. This land covers about 100,000 hectares which is mountainous forest dominated by Juniper, Olea, and others species. The second part of the natural vegetation is dense and disturbed woodland which is mainly acacia wood land as well as other associated species. This comprises of 11% of the land mass. This vegetation is found in the south-western part of the country in places like Gash-Setit area. There are also some acacia woodland in southern parts of the central highlands and western plains. The third part is described as the savanna grass land mainly dominated with grass but also small scattered acacia. This covers the majority part of the country which is 68% and found on the western lowland. The fourth is the riverine and mangrove forests which are important for ecological and economic purpose of the rural community. The riverine are found along the lower part of Anseba, Gash and Barka river basins, as well as the Eritrean part of the Setit river basin. The mangrove is found along the coastal area of the Red Sea mainly southern part of Massawa to Assab, and the main species is Avicennia marina.

What is the main responsibility of your division?

In relation to forestry and wildlife, we draft rules and regulations pertaining to the conservation and development of forest which in turn would serve as shelter for wildlife. Having this responsibility, we have issued a proclamation No.155/2006 for development and conservation, besides adopting two legal notices regarding conservation of forest and wildlife as well as their productivity. Based on the legal instruments, we formulated a forestry and wildlife inspection team in 2008. We have about 176 inspectors deployed throughout the country.  Their main task is to control illegal cutting of trees, hunting wildlife and destroying wildlife shelters. Moreover, campaigns are conducted concerning these issues through mass media and other means to raise public awareness on protecting and developing natural resources.

Can we say that wildlife in the country are increasing in number?

At present, variety of species such as wild ass, kudus, ostrich and monkeys are found in Eritrea. We can say that their number is increasing relatively. The presence of these wildlife depend on the vegetation, thus, we need to conserve forest and range lands. Through this we can provide a viable atmosphere for the wildlife to make their shelter here. The general public awareness on the negative consequences of reckless cutting of trees and hunting is progressing well. The cultural values of Afar ethnic group especially in preserving forestry and wildlife is commendable and should be followed by others.

Tell us about the reforestation program underway?

The program can be divided into two parts. First we have been carrying out reforestation programs of degraded lands with the participation of local communities and students of summer work program, by planting both exotic and indigenous trees. We are also conducting restoration of natural vegetation through developing both temporary and permanent enclosures throughout the county.  The only thing we do is we enclose the area from people’s encroachment, grazing animals, cultivation, cutting trees and so on. We are vigorously working to let nature to take its leading role in restoration of vegetation. The vegetation area could be regenerated very fast, due to the existence of previous trees or seed banks in the soil or life roots. This campaign is less expensive comparing to the effort to put under cultivation a barren land.  So far, we have more than 200,000 hectares of land regenerated naturally.

What would be the role of the undertaking reforestation activities in combating desertification?

Conserving forest is important for both economic and ecological purpose as it is well known. With the expansion of desert in this region, the forestation program would have paramount contribution through conserving soil and water, sheltering animals and regulating climatic conditions.

What message do you want to forward?

We need to work hard to reforest the degraded land by planting and developing enclosures for natural regeneration. We are also trying to strengthen community-based forestation program in view of the fact that they should take a major role and benefit from it.

Awarding The Ever Increasing Academic Excellence