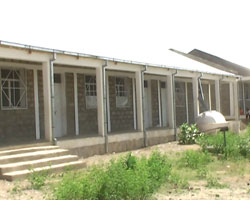 The newly built schools would now enable students who used to take classes in makeshift tent in convenient and comfortable classrooms, which in turn would facilitate the teaching-learning process. Meanwhile, 130 additional classrooms have been constructed in 4 schools which would provide service in the 2010/2011 academic  year. The move is aimed at easing shortage of enough classrooms the schools used to encounter, according to Eng. Senai Gebrehiwet.

Eng. Senai further explained that the projects were implemented in line with community-based programs and stressed their significance in relieving students from taking classes in an inconvenient situation.

Also in the second phase of the project, there are plans to construct teachers’ residence in 20 schools, additional classrooms in 8 schools, 2 pedagogy centers and 2 new schools. He called on the general public to make good use of the newly available facilities and enhance contribution in this regard.

Lecture given on significance of efficient service in promoting tourism potentials