Minister urges farmers to step up activities until crop harvest 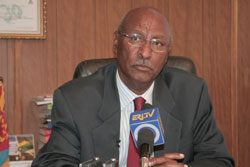 The Minister of Agriculture, Mr. Arefaine Berhe, stressed the need for members of the farming community to step up activities until crop yield so as to obtain bumper harvest.

Asmara, 21 September 2010 – The Minister of Agriculture, Mr. Arefaine Berhe, stressed the need for members of the farming community to step up activities until crop yield so as to obtain bumper harvest.

He pointed out that farmlands in all parts of the country are in good condition as a result of the good rainy season and the agricultural preparations made in advance on the part of the people and government institutions. The Minister urged the farming community to closely follow up the farmlands and immediately inform the nearby agricultural office whenever any incidence of pest swarm is witnessed.

Mr. Arefaine further indicated that the cultivation of farm lands at the right time and the distribution of the necessary crop-boosting supplies on time are among factors that contributed for the promising crop plantation across the nation.

Noting that rangelands and cattle resources are equally in good condition, he stated that animal fertility has registered 75% growth and that there are 70 stations in all sub-zones that are providing veterinary service. The Minister further reminded farmers to properly store animal feed.

Moreover, Mr. Arefaine stated that most of micro-dams and water reservoirs nationwide have impounded sufficient amount of water and that activities are already underway to cultivate the nearby land plots through irrigation farming.  He further highlighted the effective outcome of the wide-ranging and coordinated agricultural preparations made before the onset of the rainy season through the coordinated endeavors of the people and government institutions, and as such it would continue in the future in an enhanced manner.