Crops Across The Nation In Promising Condition 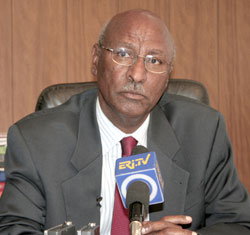 This year, it is expected that there would be a bumper harvest as result of the undertaking of agricultural development efforts in addition to the good rainy season. The farmlands in all parts of the country are showing satisfactory progress. Still, unremitting efforts are needed until the crops are properly harvested. Shabait conducted an interview with the Minister of Agriculture, Mr. Arefaine Berhe focusing on the agricultural activities during summer time.

Let’s start with the agricultural activities this year?

All the necessary preparations were made by all the concerned bodies including farmers, administrators, agriculture experts and government garage-preparing tractors- before the onset of the rainy season. Besides, crop-boosting facilities, anti-pesticide, soil fertilizers and the necessary infrastructure have been already provided. On top of this, the rainfall of this summer time was very satisfactory in terms of its distribution and amount. It is the sum of all the hard work that we are expecting for the harvest of this year to be better than the previous ones.

What would be the role of farmers in relation to the recent meeting of the Regional Administrators in Mendefera town?

Farmers basically know what they should do; nevertheless, the contribution of administrators is indispensable in conducting campaigns until the harvest is gathered. There needs to be a constant follow up because there could be some rain showers that could inflict damage to crops during the harvest time, which needs immediate action. Besides, this is the right time to select seeds for next year. It is also crucial to encourage the farming community to engage in weeding activities extensively.

Give us your evaluation regarding the condition of dams in connection with the rainy season?

Almost all dams have gathered sufficient amount of water, so we would be able to utilize it between autumn until the coming summer time. The government is making substantial investment in irrigation especially pressurize irrigation. The Gersest-Fanko pressurize irrigation could be cited as an example and also all the necessary preparation have been made to put under cultivation farmlands using this type of irrigation methods at the end of 2010 in different regions of the country. This is aimed at introducing such methods to raise productivity by three folds in one year in an enhanced manner.

What can you tell us about the reforestation programs?

Our main emphasis is to encourage the community to take a leading role in combating desertification and reinforcing reforestation program. So far, the community-based reforestation program is bearing encouraging outcome. Moreover, implementation of land leveling, constructing terraces and embankments with the assistance of agricultural experts is vital part of the program.

What about the livestock in different parts of the country?

All the rangelands and animal resources are now in good condition, which in turn has played significant role in boosting animal fertility rate by 75%. Along this, diseases that could have prevailed were put under control. The Ministry has also provided more than 70 stations in all sub-zones catering to animal health.