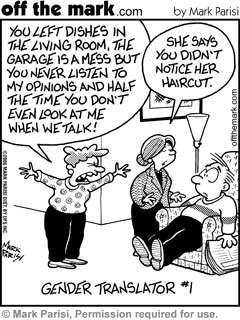 It is in a small family gathering and my mother starts scolding my younger brother for not making his bed, not doing his homework until he was told to, not picking up his clothes and cleaning his room and when my father didn’t comment, the complaining changed direction and was all directed at my father. First the issue was for not scolding my younger brother later it was that my father does nothing to help my mother and that he never stands beside her in all matters.   My father was silent all this time and was staring at the TV screen in front of him, which made my mother even more furious and she began screaming at the top of her voice, after nearly an hour: when my mother’s complaint seemed not to end, “why do they (women) have to do this?”, were the only words out of my father’s mouth. We all laughed at my father’s reaction which made my mother storm out of the room. Later I sat at my chair and began wondering, why it always has to be associated with us women only.
Women are often portrayed as being “naggers,” always complaining and needing the attention of males. And I know that men complain about their jobs, bosses, cars, cell phones etc, so if men complain about such issues, why does complaining have to be associated with us-women only. There are some who relate the word women with nagging and complaining. They only thing that they think when it comes to women is nagging, they will think that women are creatures that never stop talking about themselves, their lifestyle, neighbors, new ingredient or new recipe and will criticize everything and anything that any one tries to do. And trust me those issues are considered as meaningless by majority of men.

According to Allan and Barbara Pease, in their book “Why men don’t listen and women can’t read maps”, there are two definite reasons for women to nag their spouses. First, since most of the women spend their time in the house doing house chores, once the husband arrives she would naturally want to talk about her day and what she thinks is important. In addition to this women by nature have to talk around 5,000 words a day where as men have to talk 3,000 words a day. So those women who don’t have the opportunity to use up their quota of words, will talk about their friends, lifestyle, new recipe, new flower in the garden any thing that seems important for them, which in most cases won’t make any sense for a male listener. And once hearing the topic of discussion being something not important, men will tend to focus on other things even walk out of the room, stare at the TV which will make the women angry and start complaining that he don’t listen when she talks to him and doesn’t care about her life. Here, the only thing that men have to do to avoid being nagged at is to either listen or pretend to listen.

The other reason is that women find it difficult to directly communicate their feelings. When a woman says that her man doesn’t care about her, it means he didn’t notice her new hair cut or new outfit and many men need an interpreter to communicate with their women and understand their needs. Women also tend to use communication as a means to create intimacy and closeness. As a result, when a woman talks about her troubles, it means: “I will tell you my troubles and you will tell me yours”, but men not used to communicating along the same lines will not talk about their troubles unless they need a solution and once he hears about the trouble, he will try to solve the troubles while all the woman needs is someone that listens to her point of view which will result in further arguments. This further will lead to the men muting their women, a wife talking to her husband at breakfast table when he was buried reading the newspaper is a good example of this.

Women are the ones that keep the family intact. It is the women who take responsibility of matters that concern the whole family and they are the ones that are asked any kind of question and are always ready to answer but when men are asked, they perceive it as being a complaint. If you ask your husband or son to make the bed, they will think that you are complaining for the days you make their bed. Despite all the reasons and causes for nagging, a recent study shows that women spend around 8,000 minutes-two and half hours- a week to nag their husbands.

According to the Daily Mail, 87 percent of women admit that they nag their partner to do something where as most men say that women never admit that they are naggers. And 83 percent of men surveyed admit that their partners are right to nag them. And nearly half of the men surveyed give up if the argument continued more than an hour. While this is the statistics found out from a recent study and another study suggested how to avoid being nagged. Some of the points mentioned in the study were agree with her, try to get things done before she points them out, set deadlines and try to meet them, communicate and show her other alternatives were the most recommended solutions for not being nagged.

Though there are many men who don’t lift a finger to help their partners until they are screamed and shouted at, nagging is not the solution to make them do their chores. If your husband throws his clothes in the bedroom, don’t pick them up for him so he will not do it again and a woman has to express her needs, she has to say it loud and clear because whining and screaming will not solve the problem at all.

Our reward is the produce of our toil