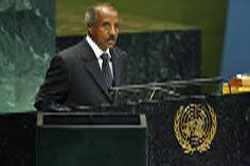 Foreign Minister Osman Saleh stressed the need for members states to exert relentless efforts to streamline the structure and procedure of the UN in a manner that equally benefits all peoples and becomes  fit to the contemporary period.

Asmara, 29 September 2010 – Foreign Minister Osman Saleh stressed the need for members states to exert relentless efforts to streamline the structure and procedure of the UN in a manner that equally benefits all peoples and becomes  fit to the contemporary period.

He made the remarks in a speech he delivered at the general debate of the  65th session of the UN General Assembly that was held on September 28.   The Foreign Minister indicated that although the prospects for a rapid reform of the United Nations appear to be dim, endeavors to this end should never relinquish. Such efforts aimed at bringing about a just and equitable world, as well as making the UN fit for the 21st century should continue with increased vigor, he added.

As regards Eritrea’s policies towards national, regional and international issues, Mr. Osman pointed out that Eritrea seeks to make modest contribution to global peace, security, justice and equality on the basis of robust and constructive engagement. He further stated that the nation’s endeavors are essentially focused on securing peace, stability, development and cooperation in the wider Horn of Africa and the Red Sea regions. In this respect, the Foreign Minister underscored that Eritrea would work diligently in efforts to transform the conflict-stricken region that is assuming dangerous trends into a cooperative and peaceful region.

Mr. Osman went on to say that Eritrea’s constructive engagement on regional and international matters stems from its firm conviction that a conducive external environment is imperative for ensuring development and facilitating the nation-building process.

“As Eritrea enters its 20th year of independence, it remains focused on broad-based and people-centered political, economic, social and cultural development that would afford a life of dignity and prosperity to our people,” Mr. Osman underscored.

It is to be recalled that the Foreign Minister delivered a speech at the 65th session of the UN General Assembly on millennium development goal that took place on September 21.