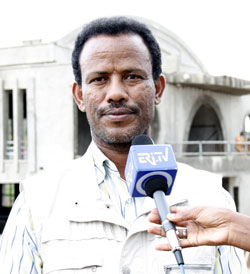 “Haben” literally means pride.  As its name implies being one of Eritrea’s flourishing construction companies Haben  has proven to be the nation’s pride in partaking in construction  activities and most notably it has recently been engaged   in the construction of educational institutions that would indeed pave  a way to the country’s vibrant  progress in terms of  investment  on literacy.

“Education for all” is the leading educational philosophy through which Eritrea has been registering notable accomplishments. Such achievements would not have been possible without putting in place remarkable educational infrastructure and deploying qualified teachers to the ever increasing new schools. In the view of the fact that a nation’s sustainable growth could not be realized by favoring the few, Eritrea has been steadily heading towards realizing practical principle of distributing broader access to education giving utmost priority to remote and previously neglected areas.
Despite people’s relentless eagerness for education,   the gap between demand and provision has not yet been balanced. Nevertheless, through illiteracy eradication programs and the increase of newly built schools and equal distribution of educational resources many underprivileged areas have been gradually showing commendable progress. Remoteness of villages from educational institutions has been also the primary challenge that has been limiting students’ participation in schools.
Owing to the construction of new schools at near by places, students’ absenteeism and number of dropouts has decreased. To prevent deterioration of women’s educational participation and promote their engagement in all developmental ventures, a viable educational system directed through coeducational philosophy has been practiced. Hence, female students would more than ever have better opportunities to carry on with their studies. As part and parcel of this noble objective, along with the over all developmental activities the government has been constructing schools through the ever growing construction companies.
Haben Construction Company is at present engaged in the construction of five schools that would serve as junior and secondary schools at five administrative areas of the Central region. According to engineer Kiflay Weldeghergish, the schools that have been constructed in Dekiseb, Geshnashim, Embaderho, Adiguadad, and Adisegudo would include from 16 to 30 classrooms and would be well equipped with educational facilities and advanced water system. Popular participation in the construction of such schools has been a great motive to the company’s staff and has been very imperative to the success and acceleration of the construction activities.

tablishment of such schools would in fact become a source of pride even to future generations. Mr. Ghirmay Ghebehiwet, as regards the impact of the schools said that besides creating conducive teaching and learning atmosphere, its grater outcome would be measured in terms of its impact for larger participation of female students. “Female students used travel for long distances and hence absenteeism and dropouts was very high both in female and male students alike. Such occurrences have been, however, decreased through the establishment of new schools resulting to greater participation of students as well as an increase in their academic performances said Mr. Ghirmay. As an instance he cited last year’s encouraging outcome registered through the construction of secondary schools in Tseazega.
Nothing is more worth mentioning than the vivid delight of the inhabitants of the five administrative areas. “Let alone getting educational access at a near by school, we have been sending our children to far off in search of education. However, such matters would be avoided from now on wards. This would bring comprehensive change for us all,” Mr. Russom Taimu one of the inhabitants said.
Mrs. Selemawit Mehari recalls the days when she as a student was not able to continue her education beyond the elementary level due lack of schools in her locality. Nevertheless, such shortcomings have now been avoided and young girls could pursue their education at ease.
According to parents from the five administrative areas the newly established schools would alleviate transportation costs. The students would also gain enough time to revise their lessons. The fresh opportunities are the beginning for a wider and equitable access to education at all levels.