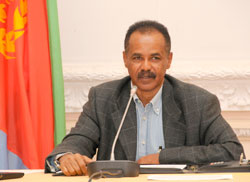 A meeting of the Eritrean Cabinet of Ministers was underway today at the Denden Hall here in the capital.

Asmara, 4 October 2010 – A meeting of the Eritrean Cabinet of Ministers was underway today at the Denden Hall here in the capital.

In its first agenda, the meeting heard briefings by President Isaias Afwerki focusing on the envisaged overall national development program for 2011 in the economic, social, political and diplomatic domains, as well as regional and global situations and future prospects and their all-round impact.

In his extensive briefings, the President noted that the 2010 rainy season was commendable both in terms of time scope and distribution, but even though such a scenario is something special, it does not warrant relaxation. In this regard, he  underlined the need for reinforcing the on-going national development campaign aimed at avoiding undue dependence on rainfall. Stressing that still a lot remains to be accomplished until the crop is fully harvested, President Isaias particularly emphasized the need for applying judicious storage and consumption mechanism in a manner that provides impetus to the national development drive, in addition to ensuring food reserve ranging from each household to the regional and national level.

Noting that achieving food security is a means and not an end in itself, he gave directives  on the need to map out action programs in all sectors and be implemented beginning this month as regards soil and water conservation, expansion of irrigation farming, building human and material capacity, coupled with the required organizational efficiency with a view to guaranteeing sustainable bumper agricultural output. The President indicated that as part of efforts to raise productivity, concerted action is being taken to boost domestic production in fisheries, on top of the existing partnership investment with foreign companies.

Moreover, President Isaias said that the nation’s animal resource potentials have not yet been effectively harnessed, and that concrete action programs should be implemented towards boosting livestock resource. In this connection, he highlighted the need to put an end to the practice of unrestrained export of cattle, and thus be handled in a manner that benefits the country.

The President went on to explain that priority attention would be given to the task of strengthening diplomatic activities focusing on expanding trade and investment opportunities.  However, he elaborated that in view of the fact that the agenda of external forces in the region continues to fail and their frustration getting aggravated, there still exist enemy quarters that do not want to see Eritrea’s economic development drive getting added momentum in such a regional scenario. Taking this into consideration, President Isaias underlined the need to exert strenuous endeavors towards achieving the set development goals.

As regards the prevailing regional situation, the President pointed out that the unilateral strategic errors earlier committed in the region created the ground for the obstructionist and adventurous interference of external forces. As a consequence, the situation in some parts of the region remains delicate, he added. Despite this, however, President Isaias pointed out that Eritrea would as ever continue to strengthen its constructive engagement in line with its correct and clear stance of promoting the common interests and aspirations of the peoples of the whole region taking into account their historical ties and shared benefits. In connection with the Somali crisis, he noted that despite the utter failure of the adventurous external invasion against that country leading to mounting popular opposition, such unfortunate policy still remains intact, instead of resorting to rectifying measures. Under the circumstances, the endeavors to achieve stability in Somalia would continue to face major challenges, the President added.

Following extensive deliberations on the envisaged national development programs and the objective political situation in the region and its future prospects and impact, the Ministerial Cabinet Meeting charted a political and development strategy.