9th Eritrea Festival in the Netherlands conducted with patriotic zeal 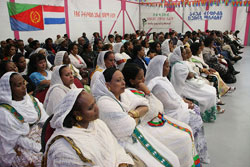 The 9th Eritrea Festival in the Netherlands was conducted from October 1 to 2 with patriotic zeal in which a number of nationals, as well as invited guests and foreign friends of Eritrea took part.

Asmara, 5 October 2010 – The 9th Eritrea Festival in the Netherlands was conducted from October 1 to 2 with patriotic zeal in which a number of nationals, as well as invited guests and foreign friends of Eritrea took part.

Various programs, including cultural and sports activities, arts exhibition, traditional tools show and others were staged  in the course of the festival, that added color to the event.

Speaking on the occasion, Ambassador Mohammed Suleiman lauded the role and contribution of Eritrean nationals living in Holland in reinforcing efforts to achieve economic emancipation and improve the people’s standard of living. He further called on them to enhance such contribution through strengthening national unity.

Also in a seminar he conducted to festival participants focusing on the objective situation in the Homeland, the region and the world at large, the high-level Eritrean government delegation, Mr. Yemane Gebreab, Head of Political Affairs at the PFDJ, commended the active participation demonstrated by Eritrean citizens in different parts of the globe in denouncing and rebuffing the US-engineered illegal and vicious sanctions resolution. He further indicated that fostering relations focusing on trade and investment, as well as partnership development is bearing encouraging outcome.

Mr. Yemane went on to say that Eritrea’s constructive views and stance in line with efforts to promote peace and stability in the region are being adopted on the part of various forces, thus fully attesting to the true image of the people and Government of Eritrea.

Moreover, certificates were handed to youths who completed their secondary education and prizes to those who demonstrated excellence in various competitions. A cultural troupe comprising Eritrean artists from all over Europe staged musical performance, thus adding color to the event.