Customs and Beliefs of the Bilen(part I) 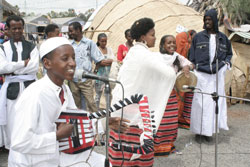 Similarities among the cultural beliefs and customs of the diverse Eritrean society are one of the unique characters that mark the unity of the country. Despite the fact that those customs and beliefs are intertwined with religion; many of them are practiced without any religious differences.

Sere-mere was one of the cultural celebrations practiced by the Bilen ethnic group for the blessing of their livestock. Sere-mere is celebrated on September 16th of every year and three days before the actual celebration starts, the society will gather cow dung and butter from the area and mix it together.  After that the people take a stem of a plant and cover it with water and milk. On the evening of Sere-Mere, two men, one carrying the stem of the plant with yellow flowers, and the other carrying the mixed butter and cow dung will go to all the sheds in the area.

The women also go to the sheds carrying a sack of sand and every cow will be covered with the mixture of butter and cow dung and will be washed by the stem covered with milk and water. While washing the animal the women throw the sand over the animal wishing and hoping that the animals breed as many as the sands. While the ritual is going on one of the men starts to sing a specific song for the event and the women will continue to sing along. On this particular day the shepherds try to stay away as far as they can from the celebration, because if they are around the people will put the mixture of dung and milk in their mouths as a good wish. They also put the mixture on the heads of young boys wishing them to grow strong.

Another celebration is the Mendelay, most of the time it is celebrated by young boys to announce adulthood. The individual celebrating his adulthood with one of his friends will go to one of his uncles. When the young boy reaches his uncle’s house, the uncle will wash the back hair of his neck with milk and remove some of the hair with a sharp knife, he will also cover the cut with a small cloth and send the boy to another uncle. Once in the house of the second uncle, he will continue removing the hair from where the first uncle left it and will also feed the young boy porridge. After that, the young boy will return back to the first uncle and will visit all his relatives, this way he will announce his adulthood to his relatives. In leaving their houses the relatives of the young boy will give the boy presents varying from livestock to money. Most of the times, if the boy is married all the presents will go to his house hold but if he is not he will share the presents with his family.

This process of announcing adulthood in the Bilen, takes a month and half and this entire time the young boy will stay barefoot with his hands tied. He will eat, drink or do all the necessary things by the help of his friend who accompanies him throughout the process. After he finishes visiting his relatives, he will take 9 kilos of flour with milk and climb the highest peak in the area. There they will prepare bread and call for all the youth of the area where they will eat the bread and drink the milk. On this day, the hands of young boy celebrating his adulthood will be untied and he will also have shoes back on his foot and his friends will cut his hair. And if the boy is from a rich family they will put a gold earring on his ear by his uncle, they will also put a bracelet with one bead on the hand of the young boy that become a man on this particular day. The celebration of adulthood can also be celebrated on the wedding day of the boy. And this way many of the gifts will be used on the home that he is going to build.