A Platform to Empower the Visually Challenged 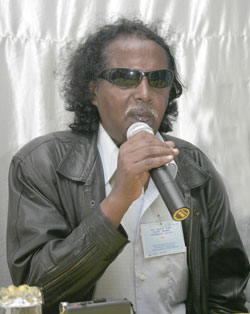 Around 80 vision-impaired people who succeeded in tertiary level academy have so far been assigned in a number of governmental and non-governmental institutions at different levels of whom most are teachers. However, productivity of well over 10,000 vision- impaired nationals throughout the country needs to be enhanced through different rehabilitation programs that include providing them with access to education and giving training on varied areas of specializations. In keeping with this reality, Eritrea National Association for the Blind (ERNAB) along with its partners recently held a three-day workshop aimed at assessing the over all situation of blindness and the achievements registered so far.

Various promotional activities have been conducted to encourage parents send their visually challenged children to school. The impact of Abraha Bahta Primary School–the only school for the vision-impaired–has been pragmatic in laying foundation for future achievements   of the students, who attended there. Director of the school, Mr. Tezare Aynalem said that the school started with 17 students in the post-independence.  Owing to the continuous awareness raising activities, children from every corner of the country started to join the school. Hence, the number of students has been gradually increasing that it has now reached an average of enrolling 65-70 youngsters annually.

The school gives academic, special brail classes, mobility orientation, as well as activities for daily living (ADL) that could help them in social interactions. Special courses on music and abacus for mathematics are also among the many. Fifth graders also take computer courses in view of the fact that they could be empowered with assistive technology in their future academic pursuit. It also enables them cope up with cutting-edge text-to-speech applications such as jaws, which helps them use Microsoft Office suite and other advanced programs effectively. The school expects to enroll 13 new students in this academic year.

In this year alone, 15 visually challenged students, ten in degree and five in diploma, graduated from Eritrea Institute of Technology (EIT), and are assigned to different ministries in accordance with their areas of studies. This has been achieved with the limited facilities that have been provided to the visually challenged students. It would not be difficult to understand that the more the students get access to assistive technology, the more achievements would they register.

Nurturing the visually challenged nationals indeed requires the collaboration of the general public and of concerned partners. Ermias Idris, an Eritrean residing in Sweden is one of the vision-impaired nationals who have been collaborating with ERNAB. He has succeeded thus far in strengthening ties between ERNAB and Swedish Association of Visually Impaired, SRF.
According to Mr. Dawit Fshaye, Chairperson of ERNAB, the Association Conducted a preliminary survey in 2000 throughout the country in 58 sub-zones. Founded in 1996, ERNAB now has over 10,400 registered members. It is to be noted that, in Eritrea, as a result of concerted efforts in the health sector, blindness-related occurrences due to missiles have dwindled considerably. Trachoma, cataract, glaucoma, genetic heredity, landmines are the common causes among others.

Mr. Dawit describes Ermias’ vital role in fostering good relations between SRF and ERNAB. He said that Ermias visited Eritrea with members of Swedish international organization named SHIA in 2001. Therefore, the ten years long cooperation between the SRF and ERNAB has been in place since then.

Mr. Ermias not only acts as board member of the SRF, but he is also engaged in coordinating international projects. Most notably, he has been coordinating the cooperation between the two associations. ERNAB has been sending detailed information of the activities that have been undertaken in Eritrea to the SRF board in Sweden.

In response to weather they plan to give assistance in kind such as brail translating softwares, embossers–Braille printers–scanners and screen readers to the only school for the blind and/or to generally empower the students with up-to-date facilities, Mr. Ermias said: “Though our contact has been with ERNAB, advanced teaching aids have now become part of the plan. However, it is through ERNAB that we attempt to reach the educational institutions. Our ultimate goal is now to make ERNAB a self sustaining Association.”

Mr. Ermias went on to elaborate that Members of ERNAB participated in the international SHIA training in which they discussed about blindness in Eritrea. And now through the conference held in Asmara, ERNAB has managed to stand as an exemplary association that the SRF has also drawn lessons from. The result of the conference has helped us identify the shortcomings that need to be addressed, Mr. Ermias added.

Pointing out the conference has helped ERNAB to share experiences with international associations, Mr. Dawit stated that ERNAB plans to build new complex with requisite infrastructure facilities and recreational clubs that would provide computer trainings for the visually challenged. Mr. Ermias on his part said that ERNAB proves to be firm to accomplish outstanding achievements, provided the association would be beefed up with minimal support.

Even though participation of the visually impaired has been increasing steadily, compared to their number their participation has been limited to date. If provided with necessary educational opportunities and trainings, these students would no doubt outshine. They have already proved to be outstanding students demonstrating excellent academic performance. Some students have even scored full marks in the secondary school matriculation exam and won ZAGRE Award for academic excellence.

It is through education that the visually impaired would essentially become competitive.  To meet the ultimate goal of cultivating productive visually challenged nationals, ERNAB, Abrha Bahta elementary school, partners and concerned individuals need to work in collaboration.  Though Abrha Bahta is a well organized school in terms of laundry, cafeteria, tailoring room, hostels, a resource center that provides educational materials in brail, agricultural activities and so on. It still needs a special attention of partners and concerned individuals to get empowered through assistive technologies. Empowering the existing school and establishing other supportive educational and entertainment centers for the visually impaired is thus a timely issue that needs to be addressed.