Eritrea Festival In Jeddah And Its Environs Opens 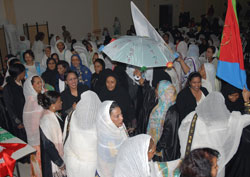 Reports indicated that the nationals have been making the necessary preparations to colorfully conduct the festival, and that various programs, including cultural, artistic and sports activities are taking place.

The Eritrean Consul General to Jeddah, Mr. Abdurahman Osman, opened the arts exhibition staged at the festival, during which children and students presented various traditional sports shows, songs and folkdances.

Likewise, the Eritrean Ambassador to Saudi Arabia, Mr. Mohammed Omar Mahmoud conducted a seminar to Eritrean youths in Jeddah and its environs on the history of the Eritrean students and youths struggle. He underlined the need for the  youth to preserve the nation’s cherished values and reinforce unity through following the foot steps of their predecessors.

The Eritrea Festival in Jeddah and its environs would continue until October 15.