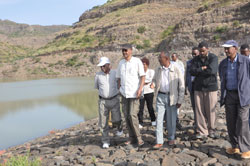 President Isaias Afewerki conducted a working tour in the southern region between the 7th and 8th of October and inspected the conditions of the cultivated crops and the present state of the dams and water reservoirs constructed in that region.

As it is known, a year’s harvest does not come about only through the toil of farmers and good rains, but it must be coupled with a continuous effort to preserve the rains through the construction of such significant infrastructures.

President Isaias started his tour by first visiting Adi Seldait. Previously, the lands of Adi Seldait have been exposed to erosion. However, today, thanks to the collective effort to restore those lands to their previous fertile state, the lands have now become bountiful. Today, the underground water capacity of those lands has tremendously increased and the wells dug there are utilized in irrigating the land for more than twice a year. The President then headed to the city of Dubarwa after he observed the ongoing agricultural endeavors in Adi Seldait.

As it has been said, this year’s summer rains were generally good and well distributed throughout Eritrea. This above fact can further be reinforced by the bountiful harvest and ripe crops around the Dubarwa sub zone. The farmers in that region have started to race to harvest their crops before the seasonal untimely rains commence thereby to forestall or minimize its effect.
After this, the President went on to visit the Quakbda-Bzage dam. As this year we have had good rains, the dam has accumulated 1.9 million cubic meters of water. The President observed the dam from different directions.

President Isaias emphasized the need to utilize water resources through the employ of a system that allocates it in a wise and careful manner and went on to stress that we need to be careful in constructing dams so as their will not overfill and spill over. Moreover, the president underscored the need of building the water reservoirs in higher grounds so that the lands underneath are irrigated through the use of gravity.
Finally President Isaias reminded the farmers that they should not spill water from overfilled dams, but rather they should come up with methods of putting the extra water into use as one cannot always have water.
President Isaias also went on to visit the Dubarwa tannery; a factory that was opened back in the late 1960’s and observed its current status. Noting the agricultural capacity of that region to sustain further husbandries, the President gave directives and emphasized on the need for another similar set-up in that region.

Moreover, the President went to see the Emba Mokonen reserve in which 20,000 new trees are planted on. The administrator of the city of Dubarwa, Mrs. Luul Asrat explained to the President that the residents of the Dubarwa administrative zone; and especially women have been working tirelessly to cultivate those trees even if it means fetching water from distant areas.

Concluding his visit to the Dbarwa administrative zone, the President visited Emni Haili. Observing the crops on his way, he went to see the Durko dam by way of the villages of Adi Agua, Adi Agerba, Adi Hasero and Adi Shmaele.
The Durko dam has a holding capacity of 1.2 million cubic meters. The water from this dam is used in drip irrigating 20 hectares of cultivated land. A total expenditure of 8.5 million Nakfas have been made towards the realization of this modern agricultural project, and is expected to rehabilitate many female family heads.

After taking a brief break, the President observed the condition of the crops around the regions of Emni Haili and Adi Quala. Right after this, the President, by way of Adi Andiel visited the Mai Aini administrative sub-zone passing through the villages of Mesafro, Tafanfas and Mdfa’e Walta.

Owing to the concerted efforts on part of the people and the government in the agricultural endeavor; and because agricultural provisions have been provided in the right time as well as the good summer rains, the crops around Hazemo are in good condition. Members of the Eritrean Defense Forces and workers of the national construction companies in that area also have played a significant role towards this endeavor through the use of their machinery.The Sesewe and Unafero dams, to which the President paid a visit, have currently accumulated enough water. The President extended a reminder to the people and members of the Ministry of Agriculture in that region that the water should be carefully utilized.

The President concluded his working visit by observing the Adi Keih College of Social Sciences. The school, which has been built at a cost of 255 million Nakfa, is expected to accommodate 2,000 students. The President also visited the St. George Church of that city, a church which was leveled down by aerial bombardment of the TPLF regime in 1998, but has been rebuilt.