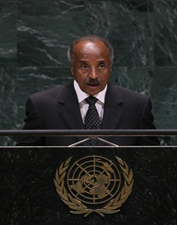 Any society has its own music and dance style that portrays its very identity. In Eritrea each ethnic group has a very rich traditional music and dance, creating a diverse cultural variety. However, for many years Eritreans had been prevented from taking pride in their own cultural uniqueness due to colonialism, until the revolutionary struggle (EPLF) played its due role. It was during this time that the Eritrean music and dance found a platform to develop, giving rise to the emergence of many musicians as well as dancers. This laid a concrete foundation for further advancement of Eritrean music and dance in the present day. Thus, promoting and modernizing such artistic works while maintaining their originality through a process of evaluation and revaluation becomes imperative. For this reason, a conference regarding the Eritrean music and dance is scheduled to be held from October 20- 24 at the Hotel Asmara Palace. Shabait conducted an interview with the Secretary of the Eritrean Music Association, Mr. Mohammed Osman, regarding this issue. Excerpts follow:

Can you tell us the objective of the upcoming conference?

Its main objective is to evaluate the development and setbacks of our country’s music. Previously, conferences were held before 6 years to assess the development of music in the country and later on the Tigre Language, which was at national level. This four-day conference would try to explore the current status of our music and dance, ways of developing it further, evaluate the originality of traditional dances, find ways to promote the talent of the new generation of musicians, coordinating electronic instruments properly and so forth. Besides, the Eritrean Music Association would also hold its third congress.

Tell us more about the Eritrean Music Association?

The Association has held its first and second congresses in 1996 and 1997 respectively. From that onward it has been conducting its activities gradually. This Association has branches in Washington, Saudi Arabia and other European countries. It was formed to raise the awareness of musicians regarding their rights, develop their talents professionally and provide trainings, among others.  It has also a magazine known as ‘Kana’.

Who would participate in the meeting and how many study papers would be presented?

The main participants would be musicians who are in the career and other invited guests including representatives from all regions. Nine study-papers would be presented focusing on song and music system, vocal coordination tactics and audience views about music, as well as the media and music, ethics of artists, lyrics and songs, quality of artistic works vis-à-vis commercial arts and the like.

What are we going to expect from this conference?

A conference is conducted to assess one’s status and take measures for the next stage. It is used as a stepping stone for future endeavors.  As planed we will hold discussions regarding the strong and weak points and gather rich ideas that could further reinforce our future activities.

I want to remind Eritreans living abroad to strengthen their organization and step up their contribution. And also to make utmost use of the opportunity they have to preserve the traditional music and dance, as well as modernize it. Furthermore, they should strengthen their relations with local musicians.