Customs and Beliefs of Bilen and Tigre (Part II) 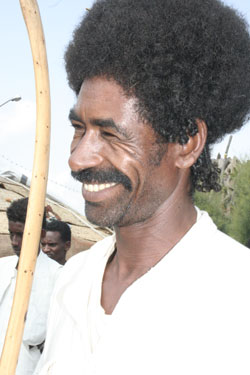 Shengelot is one of the traditions that are celebrated colorfully among the Tigre ethnic group. It is celebrated in times of transforming a young boy to man. Similar to the rituals in the Bilen, the boy celebrating his adulthood will visit all his relatives except in the Maria clan of the Tigre Ethnic group where the tradition is not observed. In the Mensa’e clan Shengelot takes place around the age of 16-20 when the boy gets land, livestock and/or weaponry from his father as a present.

While visiting the relatives the young boy wears white clothes and carries either whipcord or a twisted rod depending on the status of the boy. If the boy is from a noble family, he will carry whipcord and if he is not he will carry the twisted rod with him. In the Tigre ethnic group the course of visiting relatives takes around 40 days and the boy gets all kinds of presents from the relatives he visited. After visiting all his relatives, the boy returns to his home and officially becomes a “Shingul”, an adult. After this day, the boy is considered as adult in the society and has the right to participate in all activities that concern the society.  He can participate in mediation, the council of elders, get married, can be involved in vengeance or be a target of revenge; in general he has his own responsibilities and rights as a man in the society.

These traditional beliefs and customs may vary but the interpretation and faith of the society in such rituals is the same despite ethnicity and religious differences.