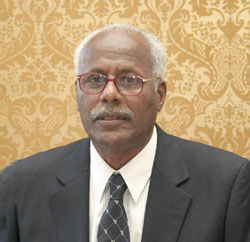 The Minister of Marine Resource, Mr. Tewolde Kelati, stressed the need for fishermen to back up the on-going government endeavors to transfer them from the demanding task of traditional fishing activities to modern ones, thus doubling fisheries production.

Assab, 15 October 2010 – The Minister of Marine Resource, Mr. Tewolde Kelati, stressed the need for fishermen to back up the on-going government endeavors to transfer them from the demanding task of traditional fishing activities to modern ones, thus doubling fisheries production.

In a meeting with fishermen from Assab and its environs, Beilul, Edi and Ti’o, he indicated that a marine resource development project which would serve over 6,000 families  engaged in fishing has been finalized and is on the way of to implementation. The project is mainly aimed at offering training courses to fishermen on modern fishing methods and its management, equipping them with modern fishing facilities, supplying the required capital for launching purposes and creating conducive ground for fishermen to organize themselves in cooperatives so that they may prosper, the Minister elaborated.

Mr. Tewolde went on to say that the Ministry is working diligently to introduce efficient management of marine and fisheries resource in a manner that calls for accountability.

Likewise, the Administrator of the Southern Red Sea region, Mr. Osman Mohammed Omar, pointed out that exerting coordinated endeavors on the part of all government institutions and the society at large is imperative so that the available marine resource may be channeled for the benefit of the people and the nation, in addition to providing impetus to the ongoing efforts to achieve food security. In this connection, he stated that the regional Administration is giving top priority to the development of the fisheries sector.

The fishermen said on their part that at present fishing activities are not being carried out at the desired level and commended the Government’s initiatives of improving their living standard.  They further lauded the project for taking into account women’s activities in the sea and its coastline.