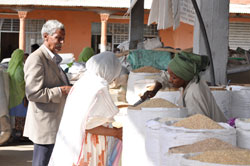 Accordingly, the prices of taff , sorghum and millet showed a sharp decline ranging from 500 Nakfa to 2000 Nakfa, they explained. They went on to say that such price reduction stems from the dedicated work of the people and the Government through possessing long-term vision. In this connection, they expressed conviction that the achievements so far registered would lay solid foundation for lasting prosperity.

The consumers and businessmen further indicated that although the increase and decline of commodities in the market is a natural phenomenon, the main reason behind the latest dramatic reduction in the price of cereals is attributed to the coordinated endeavors of the people and the Government, coupled with the highly expected bumper harvest as a result of this year’s good rainy season. In this regard, they predicted that the prices would further drop.

They went on to say that market stability is to the benefit of all and added that the promising crop plantation in the extensive Eritrean plains indicates that food shortage in the country would be history.

According to reports, seeds in this year’s rainy season were sown on time and effective activities such as land leveling, construction of embankments and terraces, construction and renovation of water diversion schemes, water catchments and the like were carried out view a view to conserve every drop of rainfall.