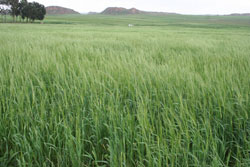 Eritrea’s regular rainy season stretches from June to September. Many crop cultivations, fruits, oil rich seeds and different cereals are, therefore, planted during this season. Farmers eagerly await this season in an anticipation that it would give then ample harvest.

Bearing in mind that satisfactory agricultural yield could only be realized through proper handling and preparation of the farmland, this year, leveling farmlands, terracing, blockages, construction and renovation of water diversion canals have been some of the undertakings accomplished before the onset of the summer season. Consequently, farmlands have been cultivated in due time and water conservation activities have been accomplished before hand. Before the beginning of the rainy season, farmlands were made ready for cultivation.

The synergy among the construction companies, farmers, administrative bodies, governmental garages, and the ministry of agriculture has been very imperative for the timely accomplishments in preparing the farmlands and seeds. To cover all the cultivated areas with abundant agricultural production and prevent it from weeds and insects and also to enrich its mineral contents, different selected seeds, fertilizers, herbicides and pesticides were distributed beforehand to all regions of the country. Permanent and mobile grain processing machines have been also deployed.

Besides conducting frequent supervisions of crop pests, trainers’ training as regards prevention of desert grasshoppers, and other insects was also given.  Likewise, timely information was disseminated and proper training was given to farmers.

With the exception of a few areas in Gash Barka and Southern regions, the seasonal rain that started in June, continued until August with good amount and distribution.  Since the in advance preparations corresponded with the good rainy season, cultivated crops have reached a good stage.  For instance, cereal grains and millet have reached reaping and harvesting stage. Some slow-growing crops such as corn and sorghum have also started to bear fruit.

Properly collecting crops from selected seeds that have been distributed to farmers so as to boost agricultural output, remains a necessity requisite that would secure better use of the seeds for the next season. Proper packaging and quarantine activities would be carried out to purify the collected seeds. To smoothly conduct the aforem

entioned activities, permanent and mobile crop processing machines that have been put in place are expected to carry out the crop gathering task successfully.

Taking advantage of this year’s rainy season, different environs and particularly some areas that are endowed with biannual rainy seasons could cultivate alfalfa and the like grasses. Conducting farm activities in isolated areas would not bear good outcome, since it would be easily affected by cattle’s grazing, birds, and other factors. That is why necessary preparations of concerned governmental institutions and of the general public become a requisite in terms of preventing from possible hazards.

This year’s good rainy season has also contributed in augmenting grazing lands. Most areas that received good rains have now been covered with green meadows that would sustain cattle until next year without any shortages of animal feed. Byproducts of crops like cane, hay and grasses need to be judiciously consumed. The impact of this year’s rainy season is now expected to enhance diary production and also boost livestock production. All in all this rainy season coupled with the concerted efforts being exerted would become a good foundation for the ultimate goal of achieving food security.