Athlete Zeresenai Stands 2nd In Half Marathon Championship In China 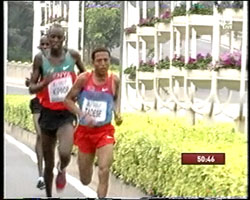 Olympian Athlete Zeresenai Tadesse scored major victory by standing 2nd in the 19th Half Marathon Championship that was conducted today in Nanning, China.

Athlete Zeresanai demonstrated excellent performance by leading in the competition right from the beginning, and in spite of the injury he sustained that made him hobble in the 16th round of the race, he continued the battle with 3 Kenyan athletes in the front. Eventually, he was surpassed by a few strides on the part of Kenyan athlete Samuel Kiprop in 100 meters that made him cross the finishing line in 60 minutes.

Olympian Athlete Zeresenai has been wining in the similar race for consecutively 4 years. He was awarded 15,000 dollars for standing 2nd in the latest half marathon championship, while another Eritrean athlete Samuel Tsegai received 5,000 dollars for finishing 5th. Athletes Tewolde Estifanos, Amanuel Mesel and  Adhanom Abraha also stood 11th, 13th and 14th  respectively in the same race.

At the national team level, Eritrea stood 2nd and received 12,000 dollars for the 6th straight year after Kenya.

It is to be recalled that Olympian Athlete Zersenai broke a new record by finishing the half-marathon race in Lisbon, Portugal, this year in 58 minutes and 23 seconds.