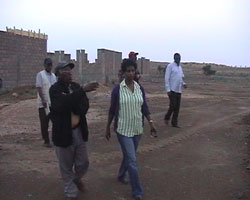 The Administrator of Northern Red Sea region, Ms. Tsegereda Woldegergis, called on the general public to step up the impressive participation they are demonstrating in the all-round national development drive towards achieving economic emancipation and prosperity.

Adobha, 20 October 2010 – The Administrator of Northern Red Sea region, Ms. Tsegereda Woldegergis, called on the general public to step up the impressive participation they are demonstrating in the all-round national development drive towards achieving economic emancipation and prosperity.

She made the remarks in a meeting with village elders, religious leaders, farmers and employees in the sub-zones of Adobha, Nacfa and Karora. Ms. Tsegereda indicated that encouraging outcome has been registered in the implementation of development programs in the region towards improving the people’s standard of living. The construction of Foro-Kohaito road and Wekiro-Gilbub road is an integral part of such a program, she added. The Administrator further explained that the putting in place of water storage infrastructure facilities in Moga’e, Assa, Ele and other localities are some of the major projects under implementation in the region.

Commending the active popular participation in soil and water conservation activities towards diverting river waters flowing from the highlands for agricultural purpose, Ms. Tsegereda emphasized the need for enhancing the activities being carried out in promoting animal husbandry and harnessing marine resources.

Also in the course of a tour to Ararib, Ala-Babu, Dirit, Baqla, Laba, Endilal, Nacfa, Emahmime and Kirora, she conducted discussion with the inhabitants of Ararib who sustained damage due to excessive floods on ways of tackling the problem. The Administrator subsequently visited the newly dug well and the schools constructed, as well as those wells that have been covered up by silt deposits in the aforementioned sub-zones.

Ms. Tsegereda further called on the people to enhance contribution in the on-going development programs without being discouraged by temporary hurdles.

Members of the public on their part lauded the Government’ endeavors to expand equitable social service in all parts of the country and voiced determination to back up the development drive.

Training On Weaving Offered To Women In Adi-Qual