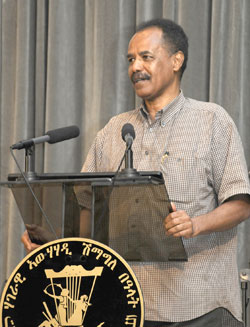 The National Conference on Eritrean Music and Dance opened today at Hotel Asmara Palace in the presence of President Isaias Afwerki, senior government and PFDJ officials, as well as a number of artists and invited guests.

Asmara, 20 October 2010 – The National Conference on Eritrean Music and Dance opened today at Hotel Asmara Palace in the presence of President Isaias Afwerki, senior government and PFDJ officials, as well as a number of artists and invited guests.

Speaking at the opening session, President Isaias highlighted the paramount importance of music in relaxing and nourishing the mind. He further pointed out that taking into account the nation’s musical and cultural progress, the development of music is assuming promising trend. In this connection, the President asserted that the necessary support and encouragement would be extended so as to improve the quality of music production.

A statement presented in the name of the Eritrean Music Association disclosed that Eritrean music was not only suppressed for many years by colonial forces but was also driven by the wishes and aspirations of the same forces. As such, one cannot expect the national music to currently stand at higher stage, it added. In this regard, the statement noted the endeavors exerted and the sacrifices paid since the 1940s to upgrade and modernize musical performance in the country that helped to transform it into the promising stage at present.

Recalling the paramount role of Eritrean music in reinforcing unity and nationalism, as well as in the achievement of independence, it stressed the need for fostering the spirit of team work and enhancing creative skill so as to develop the nation’s music that truly reflects the customs and norms of the society.

In the course of the two-day conference, a number of study papers would be presented focusing on singing and musical system, vocal coordination, audience views regarding music, the media and music, ethics of artists, song lyrics, as well as quality artistic work vis-à-vis commercial arts, among others.